Bicycle theft hotspots: Where your bike is at risk

WPVI
More and more bicycle owners in Philadelphia are falling victim to thieves, who are getting bolder about boosting your bike.

It's a crime that takes just seconds to commit, and police say the number of thefts keeps going up.

For example, at the corner of Juniper and Walnut, 15 bikes were stolen in an 18 month period.

Just last week, at 17th and JFK, daring criminals used a blow torch to cut through the sign and locks and rode away with two bikes.

Thieves are so daring, they even stole a police bike in broad daylight.

"Your first response is 'You got to be kidding me! Why would they do that, knowing that there is a good chance of getting caught," Korn said.

The problem is that thief and many others haven't been caught, though police did arrest the two thieves who nabbed four bikes from a Rittenhouse Square garage at the end of last year, John Starson and Robert Kradzinski.

Police say part of the spike in thefts is because more and more Philadelphians, like Alex Rizzolo, are going green.

"It's basically like my car in the city. I ride everywhere, all year long, until there is ice on the streets," Rizzolo said.

But after he locked his bike up at his normal spot one night, it seemingly disappeared into thin air.

"I felt dumbfounded. I was racking my brain trying to figure out, 'Did I put it somewhere else'" Rizzolo said.

Surveillance video showed the crime. A van pulled up and the thieves simply lifted the street sign out of the ground - and lifted his bike!

A few blocks away, a thief was caught on camera unscrewing the bottom of a street sign to swipe a bike in 30 seconds flat.

And with more and more thefts, police confirm Philadelphia has become a hot spot for hot bikes. Action News used police data to map the spots being targeted most often by thieves.

The top spot was at the corner of Juniper and Walnut streets in Center City. Second on the list was the 2000 Block of North 13th on the Temple University campus. Third on the list is back in Center City, at Walnut and Broad. The 4th spot is on the Penn campus in University City at 200 South 34th Street.

"Universities, Center City are hot spots, and the outskirts of Center City where a lot of people are biking to work," said Korn.

He said the criminals can easily turn around and sell these hot bikes in a hot second and pocket a few hundred dollars.

"It popped up on Craigslist, and I couldn't believe it," said bike theft victim Chris Roller. He had his bike snatched right in front of his Fairmount home in his gated front yard.

"I'd expect that it would be safe there, but unfortunately that is not the case apparently," Roller said.

Sarah Clark Stuart of the Philadelphia Bicycle Coalition believes these thieves are becoming bolder because, she says, there is little enforcement.

"There is not enough fear that they are going to get caught," she said.

About 2,000 bikes are reported stolen in Philly each year, and Stuart estimates the number is actually much higher.

"The trend is going up," she said, "and it really needs to be going down."

Here are some tips to help bicyclists protect themselves:

-The most important thing is to use a sturdy lock, like a U Lock
-Or, double lock your bike with two U Locks or a U Lock and a cable lock.
-Put your bike on an approved bike rack.
-Don't put them on something that is not bolted to the ground.
-Don't leave it outside overnight.
-Register your bike with the Philadelphia police. They just got their registry up and running last week. For more information visit: www.phillypolicebikeregistry.com

Here's a look at the top bicycle theft hotspots in Philadelphia: 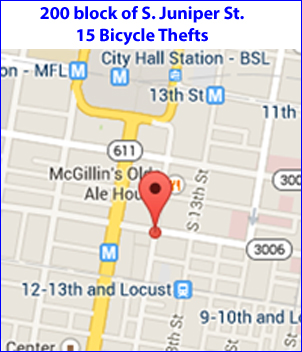 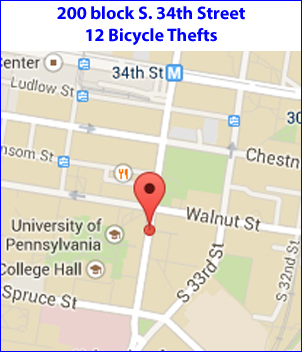 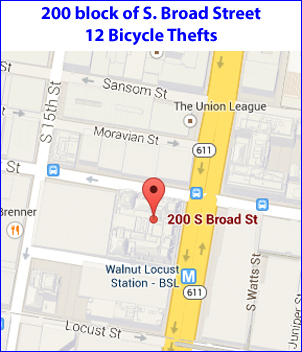 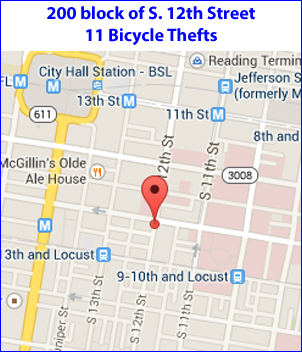 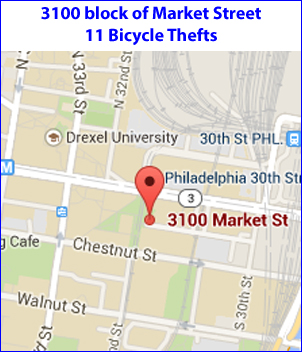 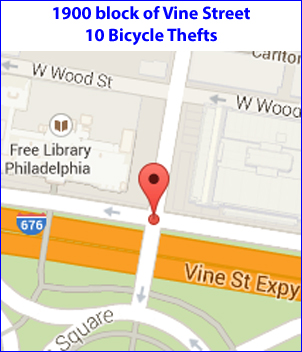 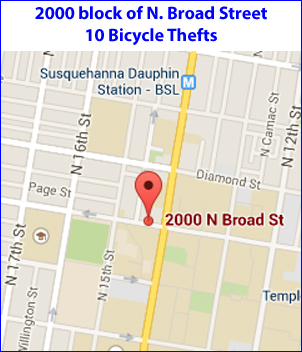