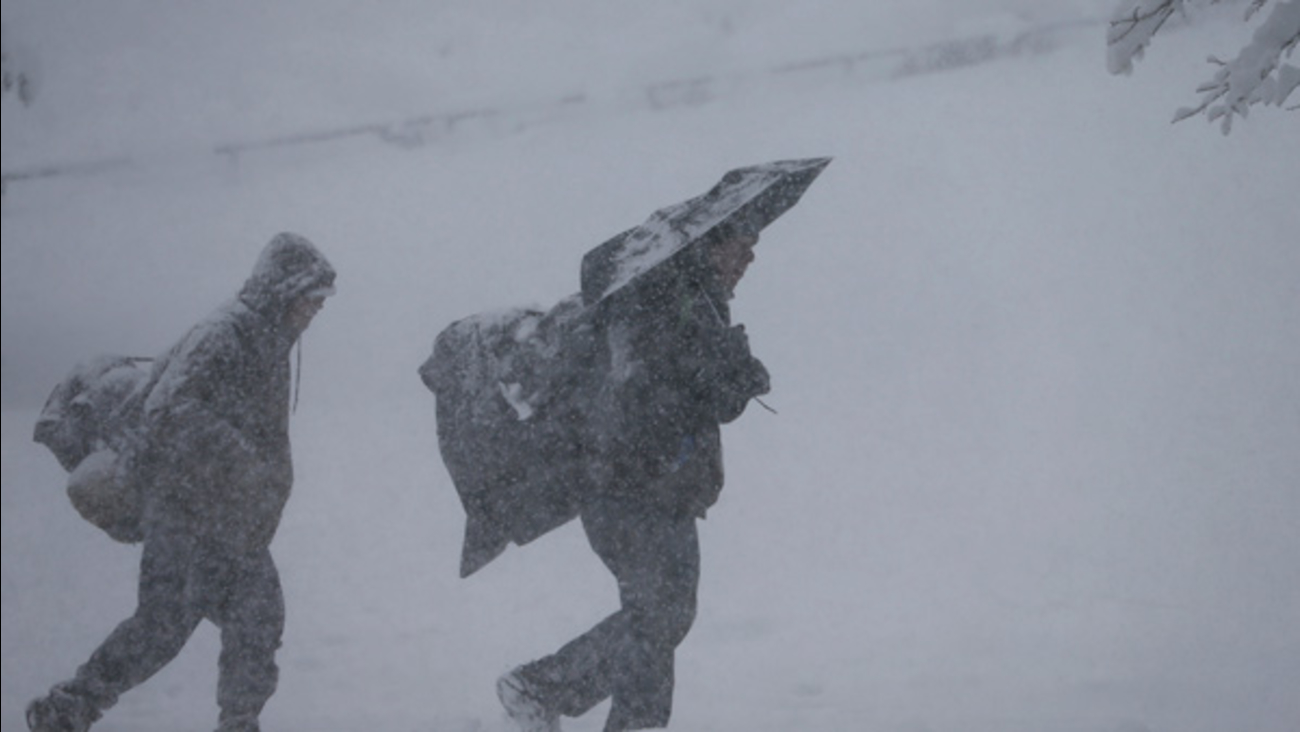 AP
By COLLEEN SLEVIN Associated Press
DENVER -- A powerful spring blizzard stranded travelers at Denver's airport and shut down hundreds of miles of highway in Colorado, Wyoming and Nebraska as it spread into the Midwest on Wednesday.

Snow blown by gusts up to around 50 mph made it unsafe for planes to land or take off at Denver International Airport, leading officials to close it around midday. The closure came hours after long flight delays caused by power outages at the airport's fuel depot and deicing supply and the cancellation of about a third of the airport's daily flights.


The road to the airport was also impassable because of blowing snow so passengers already at the airport were told to stay there until it was safe to drive again.

Hundreds of people with suitcases and duffel bags stood or lay around the terminals and there were long lines to get into airport bars. Some travelers leaned against walls, bags strewn at their feet, as others charged their phones.

Meg Stocker was heading to San Jose, California for work when her plane had to turn back to the gate.

She cancelled her trip, but still couldn't leave the airport due to road conditions. "I'll just be happy if I'm sleeping in my own bed tonight," she told The Associated Press in a phone interview.

This is just PART of the line in terminal B of people trying to rebook their flight! @DENAirport @DenverChannel pic.twitter.com/2ikHjE0Sfv

Stocker said people in the airport are coping with the situation well.

The wind and the heavy, wet snow typical for a spring storm weighed down power lines and snapped them into one another, causing many outages and flickering lights in Colorado and Wyoming.

The storm was mainly hitting the eastern, flat halves of those states, shutting down long stretches of highways, including Interstate 70 from near the Denver airport to the Kansas border, a 500-mile stretch of Interstate 80 in Wyoming into Nebraska as well as Interstate 25 in northern Colorado and Wyoming.

"It's pretty much kicking our hineys," Tim McGary of the Wyoming Department of Transportation said. "It's bad enough we can't keep up with it. That's why everything is closed."

Highway officials issued a rare order for drivers to stay off interstates in the Denver area unless they have chains, snow tires or four-wheel drive vehicles to avoid causing accidents. Normally, that's a warning issued for drivers in the mountains.

In Wyoming, the Cheyenne Veterans Affairs Medical Center, which serves veterans who live up to 150 miles away, opened its doors late because of the storm.

Even politics has to take a snow day in Wyoming as Democratic presidential candidate Bernie Sanders and former President Bill Clinton both canceled planned campaign events in the state.

Wyoming Democratic Party Executive Director Aimee Van Cleave said it's disappointing that the events had to be canceled but she was hopeful that both campaigns could reschedule visits before the April 9 party caucuses.

The system is moving to the northeast across the Plains and into Michigan.

The worst effects of the storm were expected later in the day in South Dakota, but strong winds were in the forecast all day.

In Minnesota, the State Patrol advised against unnecessary travel in the south-central part of the state Wednesday afternoon because of low visibility.

Cities expected to see some of the heaviest accumulations include Rochester in Minnesota and La Crosse in Wisconsin. It's expected to track mostly south of the Twin Cities.