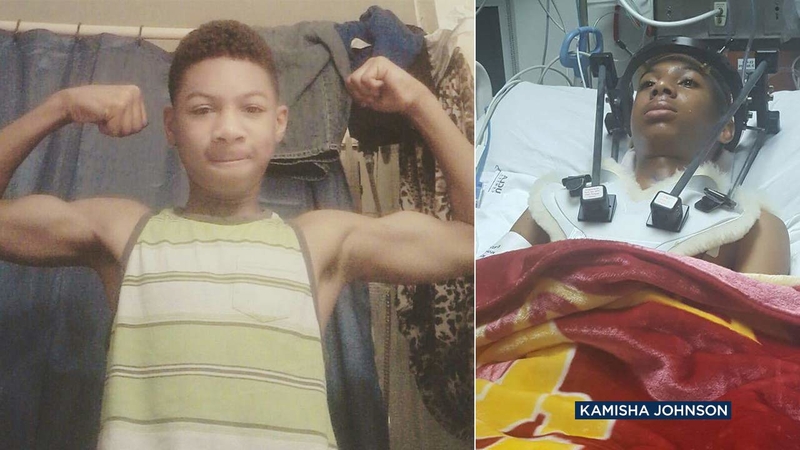 TORRANCE, Calif. -- A 13-year-old boy was severely injured in a crash involving an alleged drunk driver on Christmas Eve. His doctors say he may never walk again.

"It's hurtful to me, you know, to see my son have to struggle when all of this could have been prevented," said Kamisha Johnson.

Elijah, Johnson's son, was catching a ride from his much older cousin on Christmas Eve when the boy noticed something was wrong, but it was too late to get out of the car.

"My son said he didn't know he was under the influence or anything until they started running red lights and he was going kind of fast," Johnson described, saying that the car flipped and hit a pole.

The wreck happened around 10 p.m. on Susana Road just north on Maria Street in Rancho Dominguez, California. Elijah was rushed to a hospital with severe injuries. His mother later learned the devastating diagnosis.

Johnson says her son's dream to play football for USC was crushed in an instant by someone else's mistake.

"A few drinks caused my son to be paralyzed," she said. "I'm just glad he's alive."

Johnson says her son wants others to learn from his tragedy.

Elijah, 13, is seen in a photo from his hospital bed.

The teen had this to say from his hospital bed at Harbor-UCLA Medical Center in Torrance: "Please don't drink and drive."

Elijah has undergone several procedures and is scheduled for spinal surgery this Thursday.

His family says their financial struggles have just started. A relative has set up a GoFundMe account. If you would like to donate, you can visit https://www.gofundme.com/child-paralyzed-on-christmas-eve.