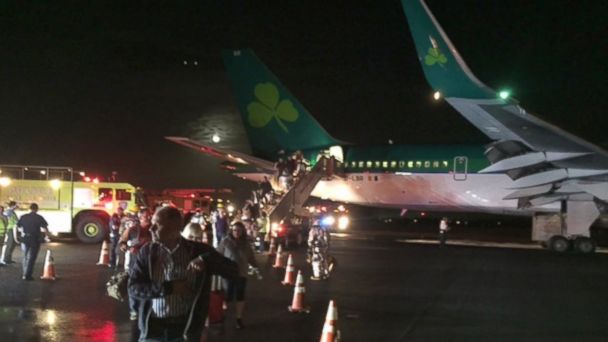 "We do have a technical issue here -- we've lost our hydraulics system, one hydraulics system, so we are going to have to return to Kennedy," the pilot told air traffic control, according to audio obtained by LiveATC.net. "We have lost hydraulic fluid -- it may well be dumped on the runway."

The system failure caused pilots to lose partial control over wing flaps and landing gear doors, forcing them to land the Aer Lingus jet -- a Boeing 757 carrying 115 people en route to Shannon, Ireland -- much faster than normal, but still within the safety margin, according to the pilot.

"Both of your main gears are smoking at this time," a rescue worker told the cockpit. "Your starboard right main was on fire."

"It just looked like a sci-fi movie," passenger Patrick Dyer Wolf told ABC's New York station WABC. "Right away we could see there were maybe 15 or 20 fire trucks right on the runway immediately, ready to drive up, and they started spraying us like almost immediately."

The pilot said he believed that heat generated by the abnormally fast landing ignited the leaking fuel.

No one was injured, and passengers were bused to the terminal.

"All passengers on board fight EI110 were disembarked safely and will be accommodated on the next available flights," Aer Lingus said in a statement.

The Federal Aviation Administration is investigating the incident.