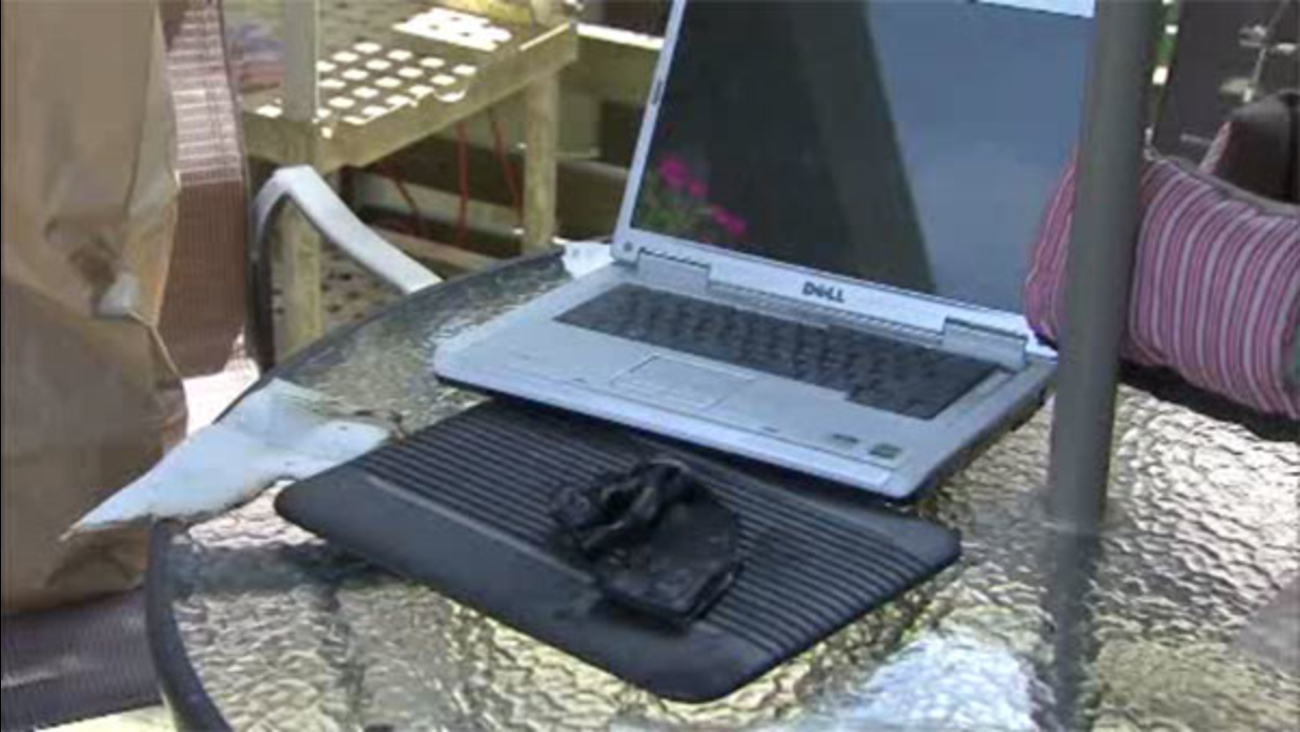 LANGHORNE, Pa. (WPVI) -- One minute, Loretta Luff of Langhorne Manor was working on her laptop. The next, she was rushed to the hospital with serious burns.

Authorities say the lithium-ion battery inside her laptop exploded Sunday afternoon. Flames spread over her upper body, charred her clothing and damaged the carpet inside her home on Comly Avenue.

"All of a sudden it just blew up."

Luff says she was using the 6-year-old computer at a desk when suddenly fire broke out.

She explains, "Caught my shirt on fire. I grabbed my shirt off. The rug was on fire and everything because it blew like five, six feet."

Luff suffered burns to her arms and face as she ripped off her burning blouse and used it, along with water from her dog's bowl, to extinguish the flames.

She also hurt her foot as she ran from the room to check on her disabled husband and get him and their dogs out of the smoky house.

"My foot is the worst," Luff said. "And I think when I came down on a piece of the hot battery part, I came down and stepped on that."

Fire investigators aren't sure what caused the battery to overheat and explode.

The issue might be with the battery itself, which was a replacement bought about three years ago. They're also looking at the extension cord and power supply. Or there might've been some sort of surge after an outage in the neighborhood earlier in the day.

Lithium-ion batteries have been blamed for laptop fires in the past - especially batteries not from the original manufacturer.

John Drengenberg of Underwriters Laboratories tells us, "If it's counterfeit, then there's no guarantee that it meets the safety requirements. If the product seems to be too cheap of too good to be true, then by all means think about it before you buy it."

Experts also say it's important to keep batteries away from other metal objects like keys and coins and also from liquids, especially salt water, which can cause corrosion.

A spokesperson from Dell issued an initial statement on the incident Monday, which reads:

"Dell places the highest priority on the evaluation and investigation of all safety and potential safety issues for the products that we and our suppliers produce. When Dell becomes aware of an incident, we handle it with the goals of assuring customer safety and a thorough failure analysis. Dell will take appropriate steps to investigate this incident. It's also important to note that, in our product documentation, Dell tells customers that 'using an incompatible battery or a third-party battery may increase the risk of fire or explosion and that they should replace the battery only with a battery purchased from Dell that is designed to work with their Dell computer.'"
Related topics:
langhorne manor boroughpa. newscomputersfirelaptops
Copyright © 2021 WPVI-TV. All Rights Reserved.
TOP STORIES
Police: 3 dead, 1 injured in separate North Philly shootings
Search for Brian Laundrie in nature reserve called off for night
Officials: 1 dead, 2 injured in Southwest Philadelphia fire
AccuWeather: Sunny and Comfortable
Two teens injured in West Philadelphia shooting
Heavy police presence as protesters trickle in for DC rally
SpaceX crew successfully splashes down off Florida coast
Show More
Large in-person events return at Linc, Kimmel Center
Man killed outside of a Hunting Park 'speakeasy'
US ramps up plan to expel Haitian migrants gathered in Texas
Video shows 4 suspects sought in fatal beating at Pat's Steaks
Police: Shooting leaves 1 man wounded at Concord Mall in Del.
More TOP STORIES News