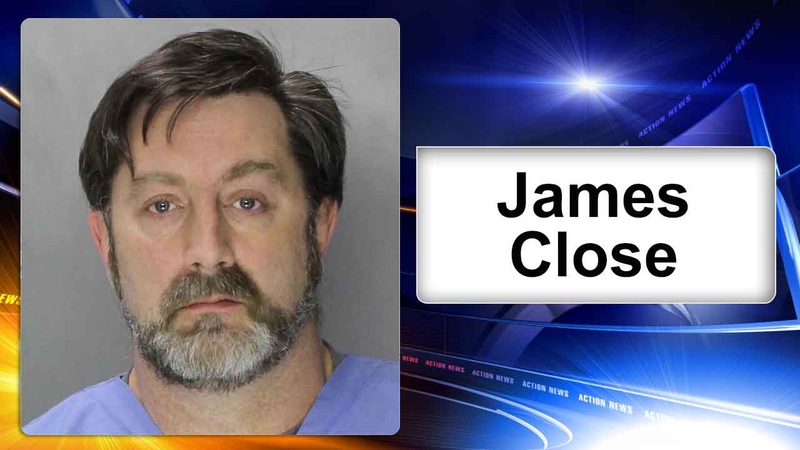 MORRISVILLE, Pa. (WPVI) -- A preliminary arraignment was held Tuesday morning in Morrisville by video hookup for 45-year-old James Close, who remains at the Bucks County Correctional Facility in lieu of bail.

Close is the father of two and worked as a Licensed Practical Nurse at Penn Medicine Dermatology in Lower Makefield Township.

That's where, police say, he recorded 18 videos of eight patients on his personal iPhone, including several of a 17-year-old girl.

Coluzzi says on February 13th, the 17-year-old girl noticed an iPhone lying on the ground while she was receiving radiation treatment for a skin disorder.

The screen indicated the device had been recording video for 25 seconds. She could see her nude reflection.

"She sees it's recording," said Coluzzi. "She freaks out. She starts making a ruckus, other people come in. They immediately contacted police."

Police got a search warrant and found other videos: of the 17-year-old patient and also of seven adult women, up to the age of 70.

Investigators say the recordings were made in the treatment booths between mid-January and mid-February without the patients' knowledge.

"Your eyes are protected," said Coluzzi. "There may be something to protect your head. And the individual didn't think he'd be seen."

He answered questions from the judge, saying his children were 16 and 7 years old. He told the judge it didn't matter what the bail was, they didn't have the money to post it.

Still, the judge set bail at $150,000 and said should he be released, he is not to contact the victims or have any unsupervised contact with anyone under 18.

The following statement from Susan Phillips of Penn Medicine was released Tuesday morning:

We are appalled at the actions of this former employee and are cooperating fully with the police as they investigate this.

Close's preliminary hearing is set for March 21 at 9 a.m. in Morrisville.