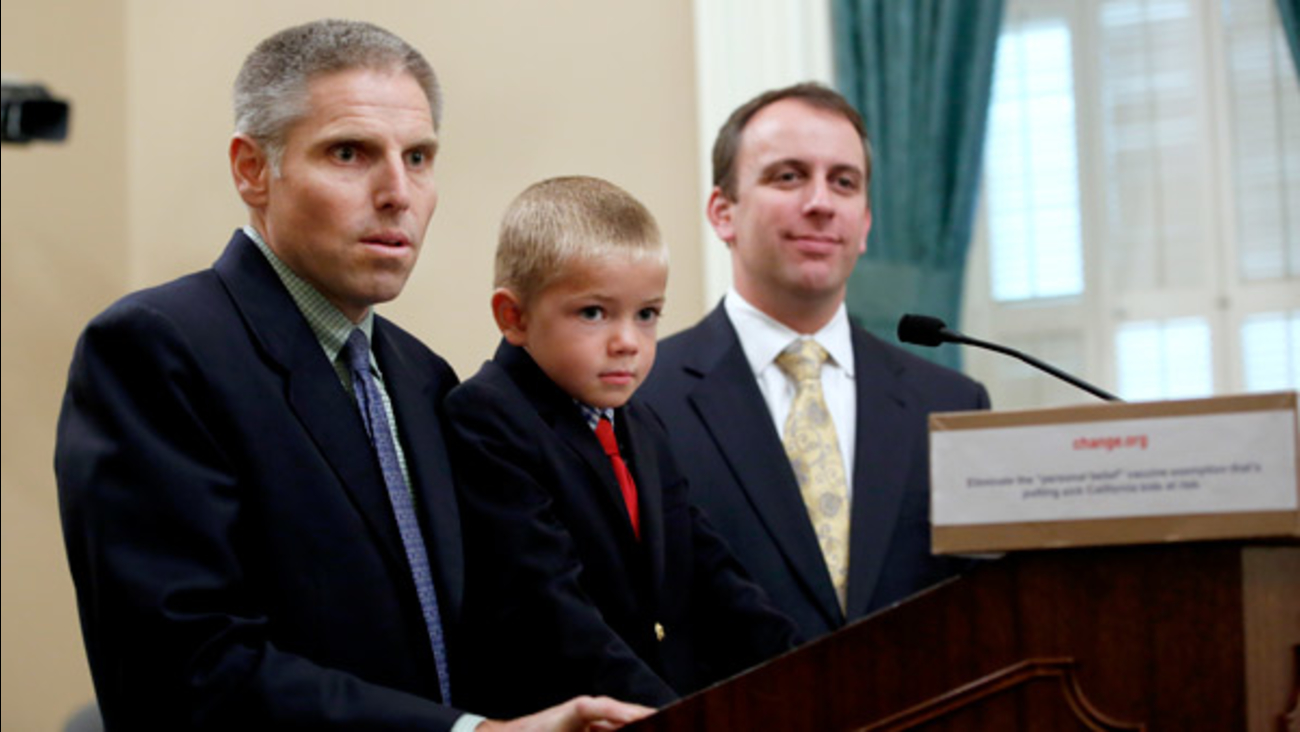 Carl Krawitt, left, a supporter of a measure requiring nearly all of California school children to be vaccinated, answers a question during a news conference in Sacramento, Calif. (AP Photo/Rich Pedroncelli)

SACRAMENTO, Calif. -- California lawmakers on Monday sent the governor a contentious bill that would impose one of the strictest school vaccination laws in the country after a series of emotionally charged debates.

The Senate reaffirmed the bill striking California's personal belief exemption for immunizations on a 24-14 vote. Mississippi and West Virginia are the only two states with such strict requirements in place.

Democratic Gov. Jerry Brown has not said if he would sign it.

"The governor believes that vaccinations are profoundly important and a major public health benefit, and any bill that reaches his desk will be closely considered," governor's spokesman Evan Westrup has repeated in recent days.

Democratic Sens. Richard Pan of Sacramento and Ben Allen of Santa Monica introduced the measure after an outbreak of measles at Disneyland in December infected over 100 people in the U.S. and Mexico.

If the bill becomes law, medical exemptions would still be granted to children with serious health issues.

Children whose parents refuse vaccination can try to obtain a medical exemption or be homeschooled. Otherwise, school-age children who currently claim a personal belief exemption will need to get fully vaccinated by kindergarten and seventh grade, the state's two vaccine checkpoints.

The measure has prompted the most heated legislative debate of the year with thousands of parents taking to social media and flooding the Capitol in recent weeks to oppose the bill at legislative hearings. They and some lawmakers say that the state is eliminating informed consent and trampling on parental rights.

Despite the opposition, the bill passed the Senate and the Assembly with bipartisan support, although not a two-thirds threshold that would be needed to override a veto.

The Senate on Monday voted on changes made to the bill in the Assembly that make it easier to obtain medical exemptions. The amendment would allow doctors to use a family's medical history as an evaluating factor.

The bill authors also agreed to establish a grandfather clause, allowing students who currently claim a personal belief exemption to maintain it until their next vaccine checkpoint.