TRENTON, N.J. (WPVI) -- A book deal for Republican Gov. Chris Christie will have to wait.

Lawmakers on Monday said they won't vote on a measure that would have given millions of dollars in pay raises to state officials and increased money for legislative staffers while eliminating a rule that Christie can't profit from a book while in office.

The measure will "not be reconsidered" in the state Assembly, a spokesman for Democratic Speaker Vincent Prieto said.

The Assembly also postponed a vote on a measure that would have allowed state and local government agencies to post legal notices on their own websites and no longer required them to publish the notices in newspapers.

The measure was fought by the state's newspapers, and one Christie opponent said the bill was "revenge" by the governor against the newspapers that have critically covered his seven years in office.

Democratic state Sen. Richard Codey said there weren't enough votes for either measure in the Senate and they wouldn't come up for a vote on Monday.

Legislative budget forecasters said the book deal bill carries a more than $10 million annual price tag for 2018 and beyond.

The bill's opponents deride it as the worst of New Jersey politics: a tit-for-tat in which the governor gets to profit from the proceeds of a book in his final year in office while lawmakers boost their staffers' pay. Judges and prosecutors, whom Christie appoints, also would get pay increases as would a number of county officials.

Candidates for governor criticized the deal. Phil Murphy, a former Goldman Sachs executive and Democratic gubernatorial candidate, said Christie is seeking to "profit off his service."

The legislation would have changed an ethics law barring the governor from drawing income beyond his $175,000-per-year salary and permitted him to profit from book sales. There are no apparent additional costs to taxpayers for allowing a sitting governor to profit from a book deal, but some lawmakers have argued it's wrong to let the governor profit while on the taxpayers' time.

Christie, who is term-limited, hasn't announced any details about a possible book. His term ends in January 2018.

Judges would have gotten 3 percent raises in 2017 and 2018. Their salaries would then be tied to the Consumer Price Index in 2019 and beyond, meaning future raises would be automatic. The legislation carries a cost for county taxpayers because the salaries of county officials like clerks, surrogates and sheriffs are tied to judges' salaries.

The costs are a small fraction of the state's nearly $35 billion budget but come after Christie and lawmakers enacted an unpopular gas tax increase.

Supporters say staff, judges and other officials haven't had raises in years, in some cases since 2002.

Vote on bill viewed as Christie attack on newspapers delayed

Legislation supported by Republican Gov. Chris Christie to scrap a requirement that local governments publish legal notices in newspapers and instead allow them to post the notices on their own websites failed to come up for a vote on Monday.

Newspapers and other opponents said the measure amounted to Christie targeting the media over their coverage of him as a two-time governor, failed presidential candidate and adviser to Republican President-elect Donald Trump.

Democratic Assembly Speaker Vincent Prieto said his members "engaged in a robust discussion" about legal ads and "opinions varied as to how best we can maintain transparency in this ever-evolving information age." He said lawmakers will continue the discussion, but Monday was the final voting session of 2016.

A spokesman for Christie said the change "will be a top priority when we return from the holidays."

Christie argues the requirement burdens taxpayers, whose money goes to local government, which pays newspapers to run notices. In an opinion-editorial published over the weekend on medium.com, Christie suggested the New Jersey Press Association, which opposes the legislation, was "shameful" and self-serving.

"The Constitution guarantees a free press, not a government-subsidized one," he wrote.

The executive director of the New Jersey Press Association, George White, said at least nine other states reviewed the newspaper publication requirement and decided to keep it. He said the proposal could cost taxpayers if local governments have to hire additional workers to handle publishing legal notices.

Publishers testified last week that the legislation could decimate the industry, costing up to 300 jobs.

Lawmakers across the country have proposed eliminating the print requirement. The New Jersey Press Association says New Jersey would be the first state to make the change.

One Christie opponent in the Legislature called it a "politically motivated crackdown on the press in New Jersey." Democratic Assemblyman John Wisniewski, who is running for governor in the Democratic primary next year, also called it a "revenge bill."

Phil Murphy, a fellow Democrat also seeking the governorship, called it a "vendetta."

Christie argues the bill would save $80 million spent on legal notices by governments, businesses and residents. Christie spokesman Brian Murray said $60 million of that figure is for pending foreclosure notices, which are required to be publicized. The administration argues the bill amounts to property tax relief since local government revenue comes from property taxes.

The state's Office of Legislative Services says the fiscal impact is "indeterminate."

The New Jersey Press Association estimated in 2011, when a similar bill was proposed, that local governments spent $20 million a year, but about 60 percent of that was reimbursed by private entities, including banks paying for foreclosure notices.

Liberal groups, including labor unions and environmental organizations, began handing out plastic backscratchers and charging that the legislation was part of a separate measure to allow Christie to profit from a book deal while in office in exchange for higher legislative staff salaries. In particular, the groups are angry lawmakers failed to move on legislation raising the minimum wage from just under $8.50 an hour to $15 an hour.

"The public recognizes this for what it is: a flighty, backroom, back-scratching deal," said Ann Vardeman, of the liberal activist group New Jersey Citizen Action. 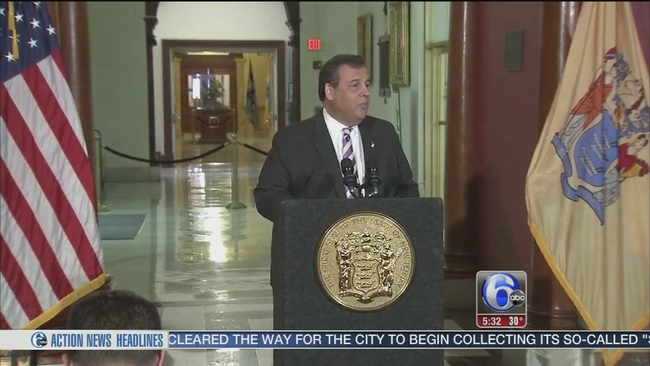