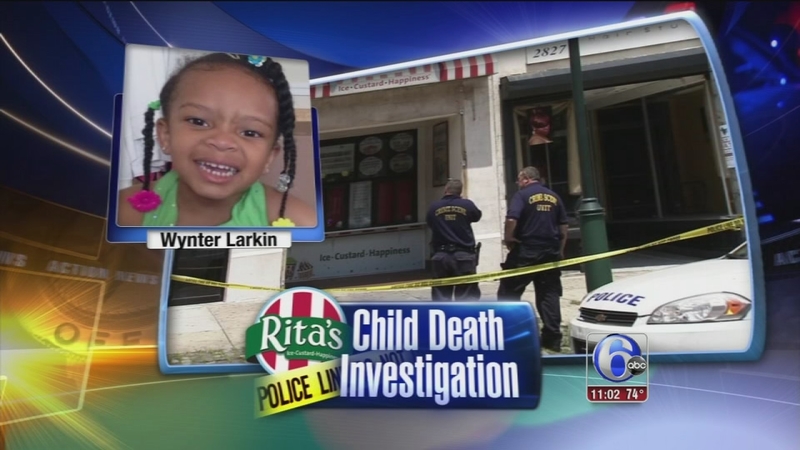 BREWERYTOWN (WPVI) -- The investigation into what caused a large security gate to fatally strike a 3-year-old girl at a Rita's Water Ice in Brewerytown continues.

Police identify the girl as Wynter Larkin of Yeadon, Pa.

It happened around 4:30 p.m. Saturday at the Rita's located at 2829 West Girard Avenue.

Friends say 3-year-old Wynter was with her mother Cheryl at an annual fundraiser at Rita's for the Omega Psi Phi fraternity and the Alpha Kappa Alpha sorority.

That's when the gate, which weighs approximately 2,000 pounds, fell and crushed the toddler.

Witnesses say as many as 20 or more men struggled to lift the gate and hold it in the air.

"The gentleman from Omega Psi Phi were holding the awning up and the little girl was on the ground and they were trying to resuscitate her," said Kealy Dangerfield Enlow.

The child was rushed to Hahnemann Hospital where she died of her injuries.

Late Saturday, crews removed the gate. Sources say there should have been 6-8 inch long bolts attaching the gate to the building, but the ones found at the scene were less than 3 inches long.

L&I officials say they had never received any complaints about the gate at this Rita's, and don't normally inspect if there isn't a formal complaint.

The manager of the Rita's has spoken to police at length.

Officials are still trying to figure out what caused the security gate to separate from the building.

The incident remains under investigation by a number of agencies including Philadelphia Police and Licenses and Inspections.