WPVI
PHILADELPHIA (WPVI) -- A beloved dog that was stolen from his owner's car in South Philadelphia back in October has been found safe.

It's been six weeks but 'Louie,' a black Labrador. was reunited with his owner JJ Pierce on Friday night.

Watch the moment the two were reunited.

She picked him up at the Philadelphia Animal Hospital on Friday.

Supporters, known as 'Team Louie,' received a call from a couple who thought they'd found Louie.

"We check the dog, it was the right dog, they handed it over, they were crying and we were crying - it was a good meeting," said Waleed Yousef.

Now Louie is back where he belongs - home.

It's unclear where Louie has been these last weeks. Doctors say he lost about 15 pounds and is weak but is otherwise okay.

"He tried to give me a hug but was too weak to do it," said Pierce.

The 2-year-old rescue dog disappeared on October 9th when the school teacher had her car stolen from the parking lot of the Home Depot in South Philadelphia. Louie was inside.

Pierce's car was found in North Philadelphia, but only Louie's collar was inside.

For several weeks, volunteers helped search and post flyers in Port Richmond and other locations around the city. There was even a billboard posted.

Desperate to be reunited with her beloved pooch, Pierce even created a Facebook page called Help Louie Get Home.

All the hard work of Team Louie paid off.

"I absolutely could not have kept fighting without Team Louie. I'm so overwhelmed and so thankful," said Pierce.

Meanwhile the person who stole Pierce's car has been arrested and the couple who found the dog will be receiving the $3,000 reward.
Related topics:
south philadelphiadogstheftpetphilly newsanimal newsdogs stolen
Copyright © 2021 WPVI-TV. All Rights Reserved.
RELATED 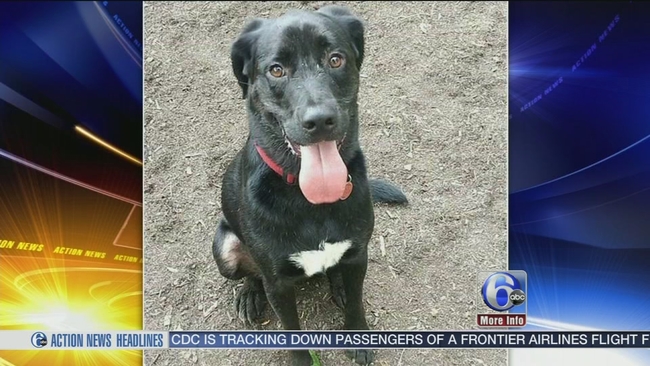