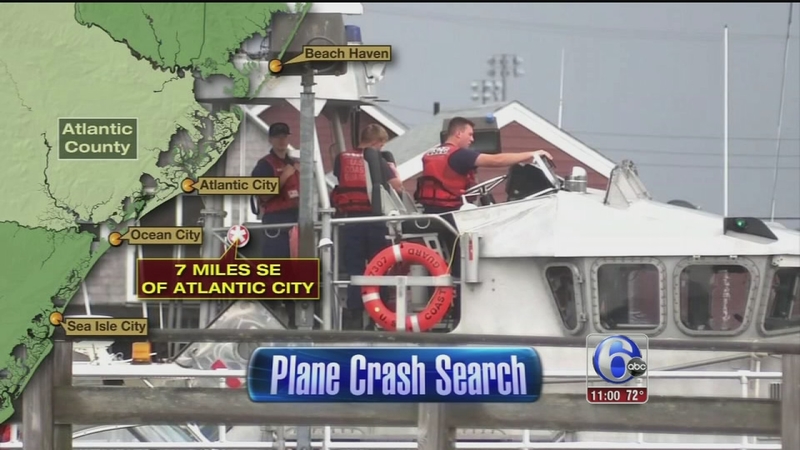 ATLANTIC CITY (WPVI) -- There was no radio communication from a single-engine plane that crashed into the Atlantic Ocean off New Jersey for the final two hours of the flight, federal investigators said Friday as the Coast Guard continued to search for the pilot.

The National Transportation Safety Board said it's not yet clear what might have happened to the plane or whether the pilot might have had a health emergency.

The Mooney M20 aircraft departed from Gaylord, Michigan, on Thursday and was headed to Atlantic City International Airport when it crashed into the ocean that afternoon, the Federal Aviation Administration said.

The pilot was identified by his wife as 68-year-old Michael Moir, of Gaylord.

The Coast Guard said it was continuing to search the debris field about 7 miles off the coast of Atlantic City, including with flights over the area and ships in the water.

Flight tracking software showed the plane traveling at around 20,000 feet past the airport. The plane began quickly descending, going from a drop rate of 1,113 feet per minute to 5,438 feet per minute over the course of two minutes while heading east and out to sea, the data showed.

FlightAware data analyst Ryan Jorgenson said that descent rate wasn't normal. He said weather data showed there was low visibility at the airport around the time the plane flew over and there were thunderstorms in the area.

The unpressurized plane flew at around 25,000 feet for most of its trip. The FAA requires pilots to use supplemental oxygen when flying above 12,500 feet for more than a half hour. Jorgensen said previous flight records show the plane flying at higher altitudes.

Moir's wife, Jean Moir, told The Press of Atlantic City that he had been flying planes for 40 years. "A couple of days ago he went to the airport to see if everything was ready," she said.