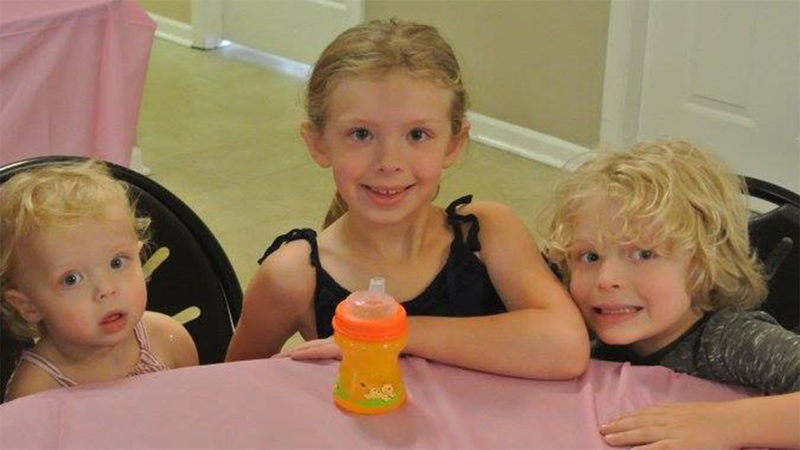 SINKING SPRING, Pa. (WPVI) -- The tiny borough of Sinking Spring, Pennsylvania, was rocked this weekend after five family members - including three children - were tragically found shot to death inside their residence in what authorities are calling "an apparent tragic domestic incident."

Officials tell us they are awaiting autopsy results for Mark Short.

Action News was there Monday as a woman left roses at the door to pay her respects, like so many others, outside the residence of Mark and Megan Short.

"It's hard to put into words. No one can really say how they're gonna feel," said George Ramsey of Sinking Spring. "It's just a sad thing."

Neighbors in the quaint neighborhood tell us they are stunned.

Their hearts break especially for the three Short children.

"They were great kids just like every other child," said Tracey Peterson, neighbor.

The kids went to a summer camp just down the street from their home.

Their absence Monday was glaring.

"To know when you walk out your door everyday you have to look at the home," said Peterson. "It breaks your heart."

She suffers from a congenial heart defect, one similar to that of 2-year-old Willow, who incredibly survived a heart transplant days after her birth.

"It was amazing to see how far she'd come. When I heard it was that family, my heart just went out to her," said McDonough.
Adams said the killings happened Saturday afternoon at a home on Winding Brook Drive in the Brookfield Manor development.
Officers were called to check on the welfare of the family after Megan Short failed to appear for a pre-arranged lunch date with a family member, which caused concern. After several unsuccessful attempts to contact Megan, the family member alerted police.

Arriving officers made forcible entry to the home. Inside they discovered the bodies of the five family members and a dog in the living room - all having died of gunshot wounds.

The handgun was found next to one of the adults.

A handwritten note was left in the home, leading investigators to believe this was an apparent murder-suicide.

Authorities have not said who pulled the trigger or what set off the tragedy.

"This is an apparent tragic domestic incident," Adams said Sunday. "Our thoughts and prayers go out to the families at this difficult time."

The couple's youngest child, Willow, reportedly underwent a heart transplant in 2014 when she was less than a week old. A New York Times article last year says the family had trouble obtaining anti-rejection medication for her.

The district attorney's office also said the married couple had been having "domestic issues." And in an April 13 post on Philly at Heart, Megan Short wrote of her emotional struggles over her child's condition.

In the post on the website devoted to families dealing with congenital heart issues, Megan Short said anxiety over her daughter's condition had left her with post-traumatic stress disorder. She said she suffered from "anxiety and nightmares" triggered by smells, hallways or even the beeping sound of a phone. She also said she experienced "survivor's guilt" when children with similar problems from other families passed away.

"I don't think PTSD ever truly goes away but, with therapy, medication, and the right support, I have begun to loosen its grip on me," she said. "As I work on my own mental healing, I wanted to share my experience so that other heart parents know they are not alone."

Neighbors are struggling to wrap their minds around the tragedy.

"It's just unbelievable. I'm still in shock. I couldn't sleep half the night because I was so upset," said Jay Pezdirc of Spring Township.
Pesdirc doesn't know the family, but was still brought to tears thinking about what happened.

Action News spoke to Sophie Zientek on Sunday, who was a cheerleading camp counselor and knew the family's oldest daughter, Lianna.

Sinking Spring is about five miles west of the city of Reading.