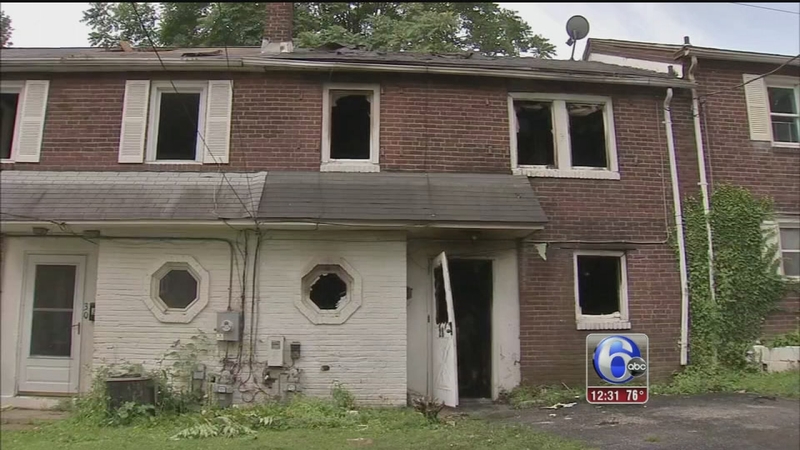 EDGEMOOR, Del. (WPVI) -- An investigation is underway after a fast moving fire damaged two homes in Delaware, just hours after a shooting on the same block.

Investigators are trying to figure out if the two events are related in some way.

It all happened on the unit block of Bedford Drive in the Edgemoor Gardens section of Edgemoor, Delaware

Police say a 15-year-old who was taken from his home on Monday had been arguing on and off with a 27-year-old. They say the boy later shot the man in the legs.

The man was treated for non-life threatening injuries and released from the hospital.

Then last night fire broke out in a house two doors down from the boy's house. Investigators are trying to determine if it was arson.

The house was vacant and neighbors say there had been a squatter living there.

The fire appears to have started in the rear. It spread to another house next door, which was also vacant.

Addie Green was passing by when he smelled the smoke. He alerted the woman in the house next to the burning house and she got out with her two children.

Green tells us, "She knocked on my door this morning crying, thanking me and stuff like that. I told her I'd do it for anybody, like I'm never gonna see nobody die."

The woman was renting the house and it will take some time to repair all the damage.

Her landlord, Will Saxe, says, "I need extensive repairs. The biggest damage is smoke. I mean, you go in there and the odor just knocks you over. So, they'll have to take everything out, clean everything, paint probably, and replace rugs."

A lot of property damage, but no one hurt.

One of the homes is for sale and was under contract. It needs extensive repairs now.

Police and the fire marshal continue their investigations, with no word yet on how the fire started.
Related topics:
delawarefireshootingdelaware news
Copyright © 2021 WPVI-TV. All Rights Reserved.
More Videos
From CNN Newsource affiliates
TOP STORIES