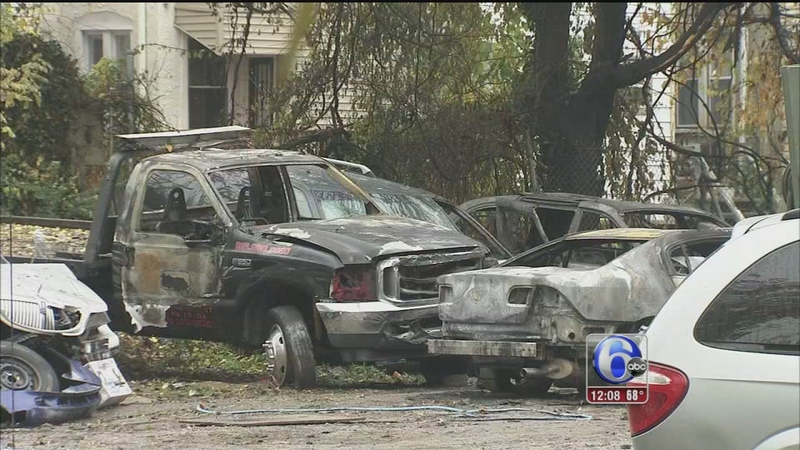 OVERBROOK (WPVI) -- Lillian Schoolfield got a call from her neighbor early Friday morning.

There was a fire in the lot of an auto shop behind her home in the Overbrook section of Philadelphia.

"The police came by," she told Action News. "Of course they said, 'Get out of the house! Out of the house!" So I put something on and ran out and got in my car."

The site of the 5 a.m. blaze was Superior Automotive in the 6100 block of Lancaster Avenue.

Fire crews had trouble accessing the burning vehicles because the gates were locked.

Through the fence later Friday morning you could see at least 10 vehicles that bore signs of fire.

Windows were broken out, the debris still smoking. An employee says the vehicles were junk cars, uninsured and towed after accidents.

Neighbors said it sounded like explosions were coming from the lot.

"What woke me up was the 'booming, booming' that was going on here, like a bomb," said resident Sam Hall. "The first one, it shook my house."

Fire investigators combed the lot with the help of a K-9 to try to determine the cause.

Last Friday, three tow trucks were damaged at a different business in a lot nearby on Lancaster Avenue.

An employee at the site of Friday morning's fire shot down rumors of a turf war between two towing companies.

So far investigators haven't said if they believe the two fires are connected.

Thankfully, even though there was some damage, no injuries were reported.