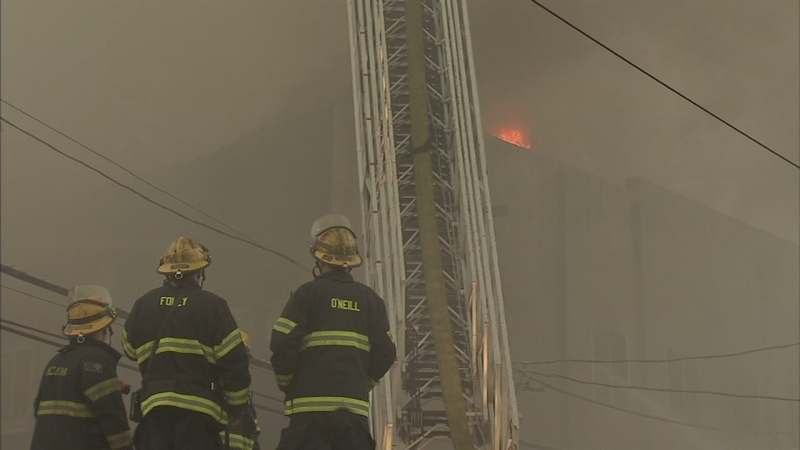 Crews were called out around 4:15 a.m. Saturday to the 4200 block of Tackawanna Street where they found thick black smoke pouring from the building.

The fire forced evacuations for people living near the area.

Residents are now being told to leave again for fear of nearby collapse at fire site. pic.twitter.com/vVpkCU6v6L

Jack Suloff, a resident said, "The whole back alley was smoke. My kitchen filled up with smoke."

Another resident Alex Ramos said, "Flames were pretty high, like 20 feet high. They knocked on my door told me to get out of my house. I left,"

Soon flames burst through the roof. Firefighters worked to stop them from spreading from the warehouse, which spans the length of a city block. They called a second alarm.

Ramos added, "It must have started in the front and ended up in back- smoke - I thought other houses burn down that's how big it was."

For hours crews blasted water at the stubborn flames. Residents were briefly allowed to return home, but then had to evacuate again, for fear the back wall of the warehouse would collapse.

John Malinowski, a resident said, "The second time they told me to evacuate because building might be unsafe."

Firefighters were ordered to lead off with their heaviest water lines to help combat the raging fire.

At 4:27 a.m. firefighters called in a third alarm as the fire continued to spread throughout the building.

Firefighters evacuated residents from several homes from Auth Street, which runs adjacent to the warehouse.

The Red Cross arrived to assist the residents.