Flight Crew Puts Out Fire In Plane In Mid-Air 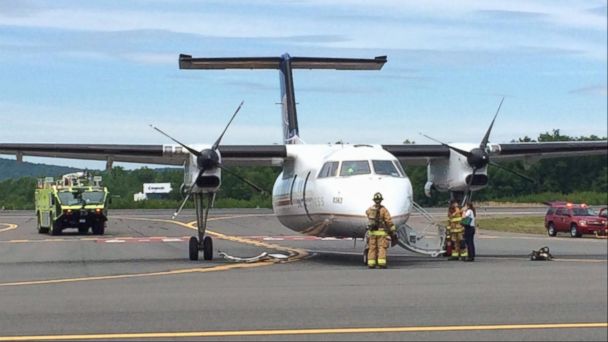 The crew on a United Express flight put out a fire in the cockpit in mid-air Friday and performed an emergency landing, airline officials said.

The small Dash 8 turboprop commuter plane with 36 passengers took off from Newark Liberty International Airport and reported the fire about 12:15 p.m. near Bradley, about 15 miles north of the plane's destination in Hartford, said Joel Raymond, a spokesman for the airline.

"At approximately 12:15 p.m. CommutAir flight 4776, operating as United Express, reported a fire in the cockpit while on approach into Hartford," he said in a statement to ABC News.

"We have a fire in the cockpit," the pilot can be heard saying in audio obtained by ABC News. "We're going to declare an emergency."

After controllers respond and tell the pilot to begin descent, the pilot then says, "Okay, we have window heat assist, got some smoke in the cockpit. We have, uh, there is a flame but I think we'll be able to get it on the ground quickly. We have a visual."

The airlines said the crew quickly extinguished the fire and landed safely, adding that all passengers and crew safely evacuated the aircraft and were bused to the terminal.

"We are very thankful for the quick response of our flight crew to ensure the safety of our passengers" and that "the aircraft has been removed from service and will undergo a thorough maintenance evaluation," the airlines added.

It wasn't immediately clear what caused the fire. The National Transportation Safety Board said it is aware of the incident and is investigating.