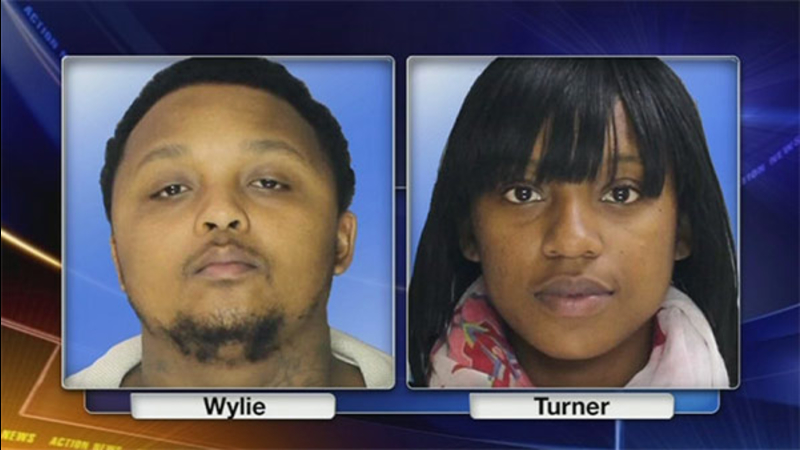 WEST CHESTER, Pa. -- Prosecutors say a former receptionist at the Chester County Courthouse helped her boyfriend try to intimidate a witness in a drug case against him.

And that witness tampering allegedly happened inside the county courthouse.

Charged are 25-year-old Kenneth "War" Wylie and his girlfriend, 23-year-old Chanel Turner, both of Coatesville.

Wylie was charged in September with a dozen felony and misdemeanor drug offenses. Authorities say the victim was in a Chester County courtroom in October, a day before Wylie was scheduled for a preliminary hearing, when Turner approached him.

"Turner went and found the victim here in the justice center - in the courtroom - and tried to intimidate that witness into not testifying," said Chester County D.A. Tom Hogan.

According to court documents, she said "Hey, don't show up in court tomorrow. War said don't come to court." When that didn't work, Turner allegedly called Wylie and told him to come to the justice center.

"He tracked down the witness and started following him to try to intimidate him, to try to get him not to testify," Hogan said.

All this happened after Wylie posted a rap video on YouTube showing himself pretending to kill an informant.

Hogan said such witness intimidation goes hand in hand with the illegal drug trade. He said it goes on all the time, but must be stopped.

"If witnesses are going to be intimidated, then you are going to see a justice department that doesn't work," said Hogan.

Turner has been fired from her job. She was arraigned and released on $7,500 unsecured bail.
Related topics:
west chester boroughpennsylvania newsdrugs
More Videos
From CNN Newsource affiliates
TOP STORIES