Folcroft officer released from hospital after being shot 7 times

Dorman, wearing a red, white and blue cap and shirt, was rolled in his wheelchair past a line of dozens and dozens of fellow law enforcement officers who turned out to show their support. 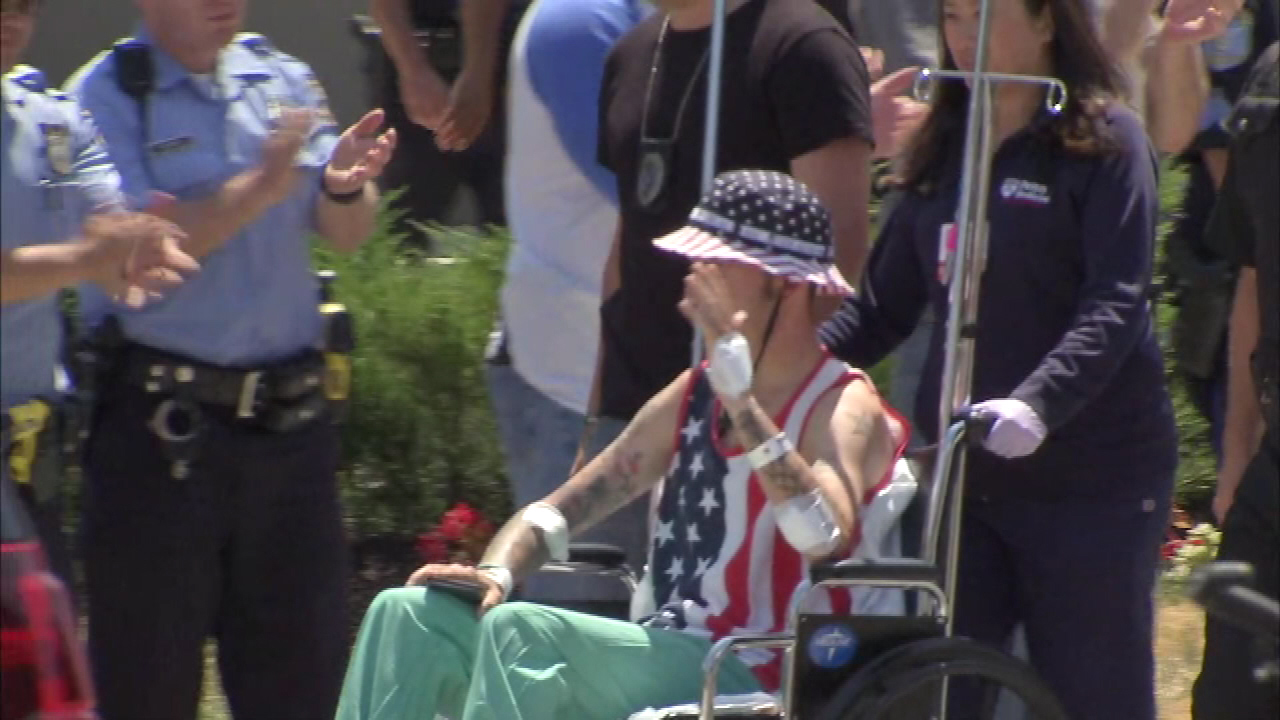 They saluted as he arrived at a waiting police SUV and was taken by police and fire escort to the Folcroft Fire Co. fire house, where he addressed the media and the public.

"I'd like to say 'Thank you' to everybody for being there for me and my family - and my fellow brothers in blue for this," Dorman told the fire house gathering. "And everybody's supporting me a lot, and I really appreciate it."

In response, someone at the fire house shouted, "We love you, Chris!" and the room erupted in cheers.

It wasn't the first time Dorman spoke publicly since his ordeal.

Dorman released exclusive video Saturday to Action News to thank those who saved his life.

"I'd like to thank all the police, paramedics and doctors, and hey Kenny, don't forget me," said Dorman from his hospital bed.

On social media, he's being hailed a hero and #DelcoLegend has taken off in part because of Dorman's Delco tattoo.

The 25-year-old police officer was planning to attend the Kenny Chesney concert Saturday night in South Philadelphia, but instead spent it continuing to recover from his injuries sustained in Friday morning's shooting.

Chesney called Dorman Sunday to apologize and offered to take him to a football game "to get some beers."

The man who allegedly shot Officer Dorman, and opened fire on a second officer, has been charged.

The suspect is identified as Donte Brooks Island, aka Abdul Wahi. He is charged with two counts of attempted murder, two counts of aggravated assault and related offenses.

Action News was there Friday as Island was escorted to a patrol car to be taken to his arraignment. He is being held on $1 million bail.

Island had been recently released from prison after serving time for drug and firearms violations, District Attorney Jack Whelan said.

The impromptu vigil a show of support for Officer Dorman.

A police officer was shot and wounded in Folcroft, Pennsylvania.

The shooting happened behind an apartment complex in the 1500 block of Elmwood Street around 10 a.m. Friday.

Dorman arrived on the scene and confronted Island, police say. There was a struggle and Island allegedly drew his weapon and shot Dorman seven times.

Exclusive Action News video shows the windows blown out, a bullet still lodged in the headrest of the passenger seat.

He was flown by helicopter to Penn Presbyterian Medical Center. Sources tell us he will be released from the hospital Monday.

A second officer arrived on the scene, Whelan said, and Island allegedly shot at that officer. That officer was not hit.

A third officer managed to get Dorman into his police vehicle and rush him to the hospital.

Dorman was wearing his bulletproof vest, which police say saved his life.

"I was told by the doctors that 'thank God he had his vest on,' so apparently there may have been several shots to his vest," Chief Robert Ruskowski said.

Tamika Dailey tells us she heard the shooting.

Residents of the Elmwood Avenue Apartments were evacuated as SWAT officers surrounded the building.

A state police helicopter was brought in as an 'eye in the sky,' and it flew overhead as a loud flash bang was fired.

SWAT officers moved quickly, taking Island, who was hiding out in an apartment, and several women into custody. Police say a .40 caliber handgun, believed to be used in the ambush, was recovered.

As the officers stood down and departed, residents who had been watching applauded the police.

Dorman joined Folcroft's volunteer fire department when he was 16, and attained his dream of becoming a borough cop last June. In that time, the chief says Dorman has proven himself to be an exceptional officer.

"Comes from a great family. I do personally know his mother and father. I actually worked with him. His father is a former councilman here in Folcroft Borough," said Whelan. "It's a shame both the officer and this family has to go through his."

"He's just a good guy. Nothing bothers him. Great sense of humor. Then something like this happens," said Ruskowski. "I'm just hoping for a full recovery so we can get him back."

Ruskowski said Dorman's mother and father are at the hospital, "obviously upset, but relieved that he's stable."

A manhunt was underway for a suspect who shot a police officer in Folcroft, Pa.

For the small community of Folcroft, Officer Dorman is the first to be shot in the line of duty.

"We want to ask you to keep this officer in your prayers as well as his family," said Whelan.

"To have an officer injured like this, never. I mean you know this is a wake up call for these small towns," said Ruskowski.

As it turns out, Dorman wasn't even supposed to be working Friday morning. He was filling in for someone else and was just days away from learning if he was going to be hired as a SEPTA police officer.

A GoFundMe page has been started for the police officer. More than $13,000 has been raised so far.