Good Samaritans save runner in cardiac arrest along Schuylkill River 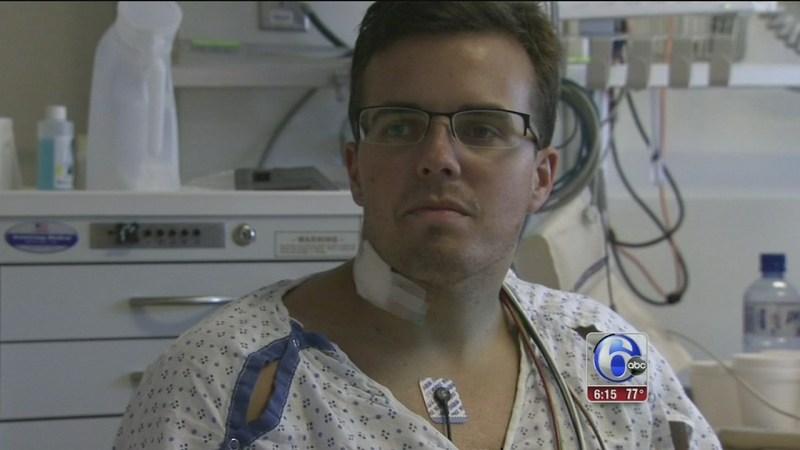 VIDEO: Good Samaritans save runner in cardiac arrest along Schuylkill

CENTER CITY (WPVI) -- An athlete went into cardiac arrest during a jog along the Schuylkill River but the quick work of a group of Good Samaritans, including a doctor, helped save his life.

27-year-old Tewksbury collapsed on the Schuylkill River trail while running earlier this week.

"Once I passed the Art Museum and JFK, it got a little hazy and I don't remember much after that," he said.

"We saw him kind of fall down on all fours. At first we thought he was seizing but it quickly became apparent that he lost his pulse so we administered CPR. And then kind of the whole community came around us," said Dr. Aaron Mendelson.

Mendelson is a third year resident at the Hospital of the University of Pennsylvania and his wife is an ER doctor.

Someone else grabbed Tewksbury's phone and called the last number dialed - his mom Lois.

"The phone rang and it was Todd and I said, 'What did you forget?' and it was someone else and they said, 'There has been an emergency, does he have any heart issues?' said Lois Tewksbury.

While his family rushed to the hospital, the group of Good Samaritans along the trail administered CPR for about 11 minutes.

There are defibrillators in all Philadelphia rec centers so someone ran over the Markward Playground and asked the staff for help.

"Someone came in asking for our AED, two women working on our summer staff came out and brought it out to them," said Katie McGurk, playground staff.

"In this case I don't know if he would have survived without the defibrillator," said Dr. Mendelson.

Tewksbury and his family are grateful for all the help.

"I'm just so grateful that Aaron and all these other people were there to help me when I needed it," said Tewksbury.

But Dr. Mendelson says anyone could have did it.

"I think anyone who is trained in CPR could have done what we did. It doesn't have to be a nurse or physician," he said.

Doctors say a common virus likely caused the stress on his heart which led to cardiac arrest. The immediate CPR helped save his life.

Tewksbury was released from the hospital on Friday.

"The fact that he will walk home and maintain a very normal life is a miracle," said Lois.