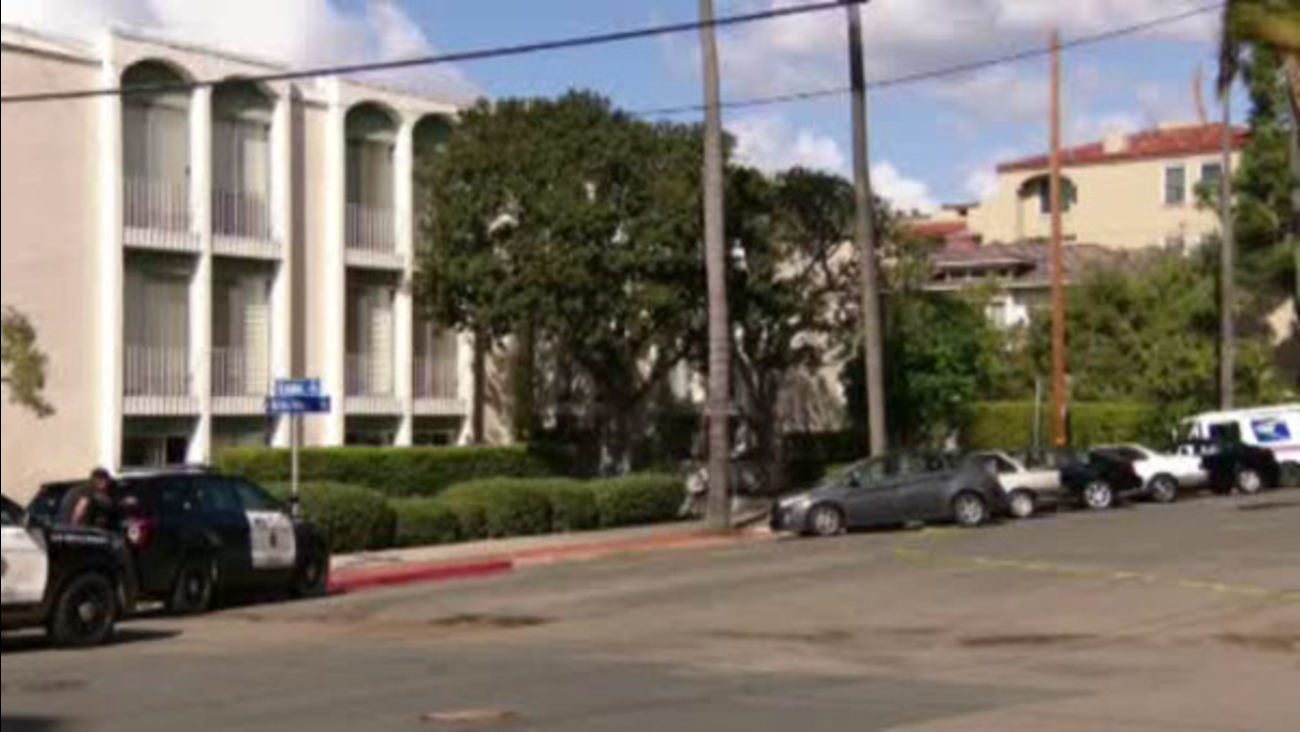 SAN DIEGO -- A domestic violence suspect with a high-powered rifle was firing sporadically inside a San Diego apartment complex Wednesday, causing the city's nearby airport to stop planes from landing, authorities said.

Officers swarmed the building and exchanged gunfire with the man. No one was reported hurt, and police had the shooter contained to his rooftop apartment, Lt. Scott Wahl said.

The complex is under the San Diego International Airport's approach path, and arriving planes swoop in low over that part of the city. The airport halted landings as a precaution, Federal Aviation Administration spokesman Ian Gregor said.

It was still allowing departures, but the halted landings were affecting the schedules of some outgoing flights.

The suspect opened fire on officers responding to a domestic violence call shortly after 9 a.m. at the complex in the trendy Bankers Hill neighborhood near downtown, Wahl said. The shots came "within inches" of striking the officers approaching the man's rooftop apartment, he said.

The officers returned fire as they retreated.

Authorities asked people in the area to stay inside and keep away from windows as they surrounded the complex. Schools in the area were placed on lockdown.

Officers with assault rifles were seen running down the street, and gunshots were heard.

"He's shooting in all different directions," Wahl said. "But we have him contained inside the building."

It's unknown if anyone is in the apartment besides the suspect, who has been identified by police but not named publicly. Officers fired tear gas at one point to attempt to get inside.

"This situation is rapidly evolving," Wahl told reporters near the scene.

Numerous gunshots rang out as he spoke.

Wahl later said the suspect was moved to an area of the apartment where he no longer posed a risk to air traffic. However, it was unclear when plane landings might resume.

Police were talking to the man and trying to persuade him to surrender.

Tom Neu, who lives next door to the suspect, told reporters he was working at home on his computer when he heard a bang. He went to his balcony, saw a hole in the stucco wall that separates his apartment from the suspect's, and called 911.

For about 40 minutes, he cowered in his bathtub, talking to friends and co-workers on his cellphone.

"It's terrifying. Heart's pounding," he said. "You're thinking, 'I might get shot and killed in my own bathtub.'"

Neu heard numerous gunshots and loud booming before a SWAT team came to his unit. Police gave him instructions over the phone on where to walk inside the apartment, and rescuers led him downstairs.

Neu didn't know the suspect but said the two exchanged greetings in passing.

Erik Carstensen was on a Southwest flight from Chicago that was diverted to an airport in Ontario, outside Los Angeles. Passengers were told there was a security problem at the airport, but people on the Internet soon spread the news of the gunman. Carstensen said his wife was at the airport at the time.

"I was a little worried for her until I learned he was not at the airport," he said. "But it's worrisome, the whole thing."