VALLEJO, Calif. -- The case of a California woman who said she was kidnapped for ransom only to have police call it a hoax took another bizarre twist Monday when federal prosecutors announced they charged a soon-to-be disbarred Harvard-trained lawyer with her abduction.

Authorities say this case may have finally come together because the suspect in all of this, 38-year-old Matthew Muller, apparently left his cellphone behind at the most recent home invasion. He's now suspected in a string of violent crimes.

In the meantime, at a Monday afternoon news conference, the couple in the March 23 kidnapping, stood with their hands held tightly alongside their attorneys who called for the Vallejo Police Department to issue them and the public an apology for originally calling their kidnapping a hoax, all while the suspect continued on his crime spree.

The FBI says Muller was charged last month after he was arrested in June in South Lake Tahoe in connection with a home-invasion robbery that had similarities to the kidnapping.

The case began when Denise Huskins' boyfriend, Aaron Quinn, reported that kidnappers broke into the couple's Vallejo home, abducted her, and demanded an $8,500 ransom.

Quinn's lawyers have said he awoke to a bright light in his face, and two kidnappers bound and drugged him.

The 29-year-old turned up safe two days later in her hometown of Huntington Beach, where she says she was dropped off. She showed up just hours before the ransom was due.

Later that day, Vallejo police said at a news conference that the kidnapping was a hoax.

"The fact that we've essentially wasted all of these resources for really nothing is upsetting," said Lt. Kenny Park during an interview in March.

Police had since declined to comment other than to say they continue to investigate. A call to the Vallejo department was not immediately returned Monday.

"It was very troubling that they were trying to pin this on my daughter and I knew that no way she would be involved in something like a hoax," said the victim's father Mike Huskins. "Can you imagine being rescued from a kidnapping and then people are on you for committing a crime? I mean, how would you feel?" 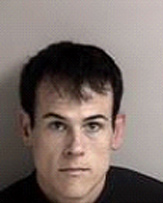 Matthew Muller is seen in a booking photo from police in Dublin, California.

Huskins and Quinn held hands and stood alongside their attorneys in solidarity. Their lawyers advised them not to speak because of the ongoing case. They had sharp words for Vallejo police.

"Go out, find out if there are other guys, get them in custody," said Quinn's attorney Daniel Russo.

The FBI affidavit describes a terrifying ordeal inside their Vallejo home, including Huskins and Quinn being threatened that they'd be cut or shocked if they didn't comply.

"As poor a job as the Vallejo Police Department did, the Alameda County Sheriff's Office did a terrific job," said Huskins' attorney Douglas Rappaport.

That agency recognized similarities between the March kidnapping and a June home invasion robbery in Dublin, California.

"I'm glad we caught him because who knows what he could have done," said Lt. Herb Walters with Dublin Police Services.

The couple's attorneys say they believe there could be other suspects. Something FBI investigators will not comment on.

The FBI affidavit suggests that perhaps Muller was after money. But the couple's attorney say there's absolutely no connection between him and them.

It turns out the Orangevale, Calif. resident is no stranger to federal agents. Prior to his arrest, he was often arguing cases in federal court as an immigration attorney.

Muller is a veteran of the Marines, a Harvard Law graduate, and a San Francisco immigration attorney.

But members of the law firm where he practiced did not want to talk on camera. They said he hasn't worked there for three years.

And according to the California Bar association, he's slated to be disbarred next Sunday.

He's accused of telling a client he had filed immigration papers for a relative, which he never did, but billed them anyway. Muller never contested the charges.

According to the FBI's criminal complaint in the kidnapping case, he told agents he was a U.S. Marine and may have been suffering from post-traumatic stress disorder.

Sister station ABC7 has learned from the Marines that he served from 1995 to 1999. He left the service as a sergeant and he played trumpet in the Marine Band overseas in Japan and Australia.

Right now, he's connected to the two bizarre kidnapping cases in Dublin and Vallejo. But investigators in other Bay Area cities say he is also a suspect in two other similar 2009 cases in Mountain View and Palo Alto.

Investigators in those cities tell ABC7 News that in light of Muller's arrest, they have already started checking to see if there is any connection to their 2009 cases which are still open and involved similar aged victims and circumstances.