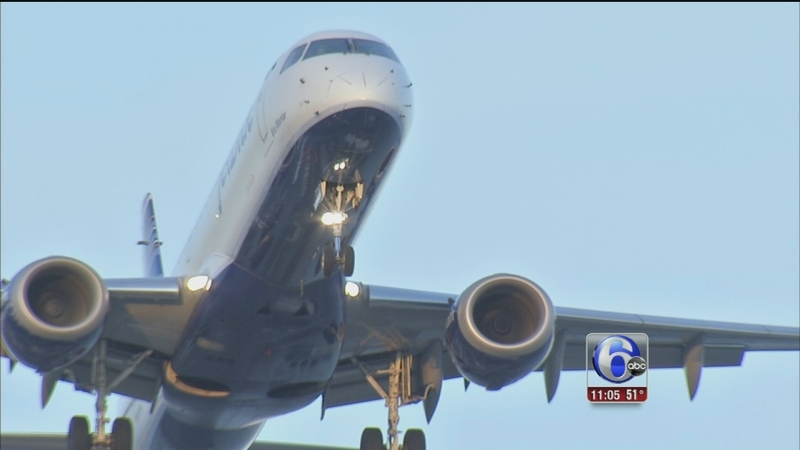 BRUSSELS (WPVI) -- The Brussels attacks have led to a higher security presence in the United States, especially at all major transit hubs which includes the Philadelphia International Airport.

Passengers arrived for their flights with Tuesday's deadly explosions in Brussels on their minds.

Jibri Turner of Chester, Pennsylvania said, "I'm just trying to make it home safe, that's all I'm trying to do."

Two of the explosions took place in the departure hall at Brussels airport around 8:30 a.m. local time.

There was one American Airlines flight to Philadelphia scheduled to depart Brussels at 9:40 a.m., which was cancelled.

American said the blasts did not occur in their check-in area. Their airport employees and crew are accounted for and safe.

Many arriving on a flight from Paris Tuesday afternoon were not aware of what had occurred in Brussels.

Gregor Grant of Wayne, Pa. only heard the barest of information.

"I was sitting on plane and I texted my brother and he said there was a terrorist attack in Belgium and watch out. That's all I knew," Grant said.

Michael Evans of Perkasie, Pa. says the deadly attack will not deter him from flying internationally.

"You can't let terroristic acts control your life, you got to keep living. I would say it's not going to deter us from doing anything," Evans said.

Drexel student Vatsa Vakil added, "For me, I'm an international student. I have to fly out more often. It's hard to be scared for flying. Thousands of flights go out every day."

Officials say in the wake of the Brussels air terminal attack there is an increased number of uniform officers at PHL today.

But it is nothing like the post 911 days where the National Guard were deployed and signs announce potential police stops of vehicles arriving at the airport.

Like a shopping mall, an airport departure hall is a massive soft target. Would it be safer to move x-ray and metal detectors to an airports front door? Possibility.

"We are an open and free society. We pride ourselves on being that way. We don't want to turn the United States into a prison camp state," security expert and former Homeland Security deputy Jack Tomarchio said.

Tomarchio says it is better to find those willing to commit suicide by terrorism by using intelligence and surveillance of social media.

"I think it continues to be a very useful program, some say it violates privacy, but I think if done in the proper way, it does save lives," Tomarchio said.

American Airlines issued a travel policy for customers with reservations to Brussels who wish to change their itineraries.

Customers booked for travel March 22 through March 29 may request a refund, select an alternate airport or reschedule travel through April 12.