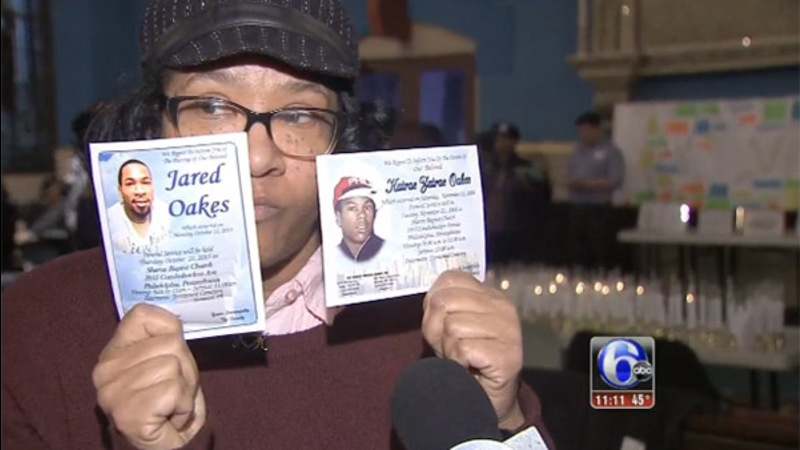 CENTER CITY (WPVI) -- More than 300 people from across the city gathered Friday night at the First Unitarian Church of Philadelphia in Center City to honor the lives of those lost to gun violence and to give strength to survivors left behind.

"The pain never goes away," said Monique Irvis, the mother of one of those victims.

Irvis lost her 19-year-old son, Eric Woods Jr., to gun violence in August 2007 as he walked home from a basketball game. To this day they still don't know who killed him.

"That's the hardest part," said Irvis. "To know that somebody is still walking out here that took his life."

Latanya Boyd-Smith lost her 21-year-old son, Lamount Smith Jr., in September 2010. He went to peacefully resolve a petty neighborhood dispute with another man, but the alleged gunman had another plan.

"He came with a gun, and that's how he chose to end the situation by shooting my son instead of resolving the issue that they had," said Boyd-Smith.

"The message I want to give is, it needs to stop! Okay?" said Oaks. "It's too many babies dying for no reason!" she screamed.

Mayor Jim Kenney lost a nephew to gun violence many years ago and knows something about the pain it causes. He came to comfort families, but knew there was little he could say to make the pain go away.

Whatever the solutions may be, for many families, one thing is unmistakably clear - the social tide in this country has to change.