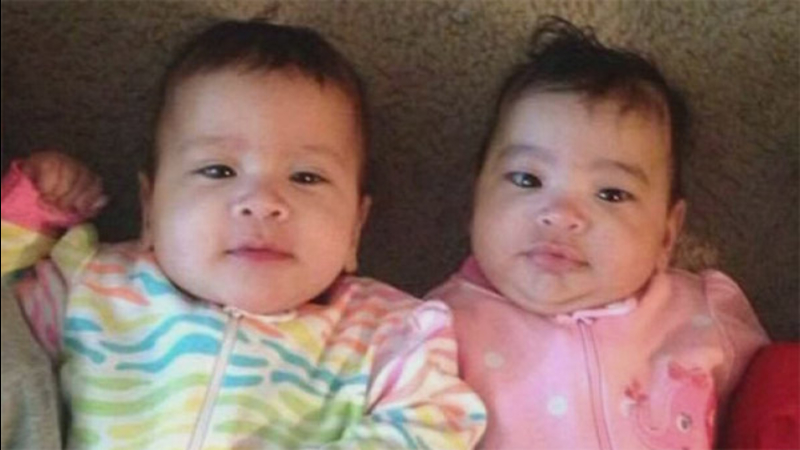 LINDENWOLD, N.J. (WPVI) -- An investigation is underway after twin infants were found dead in a Camden County apartment.

It happened at the Pine Apartments at 550 Bilper Avenue in Lindenwold.

Action News obtained a picture of the twin girls, who are only 7 months old.

Their mother, identified by neighbors as Alexandria Garnett, was hysterical when she called 911 about 8 a.m. Wednesday, saying her twins were not breathing.

She pleaded for help as the dispatcher tried to calm her down and get information.

"Ma'am, are the children, are they on their back?" the dispatcher said.

"I just put them on their backs. They were sleeping on their stomachs," Garnett replied.

"Ma'am, do you know how to do CPR?" asked the dispatcher.

"I tried, I've been trying for the last 15 minutes," she responded.

An Action News viewer shared a video of the heartbreaking scene of the two young bodies being carried away by the coroner.

"I actually didn't know what to think. I couldn't believe what I just saw. It was just heartbreaking, very heartbreaking," said viewer Crystal Lageren.

Garnett tells authorities the only other person in the apartment was a friend. Neighbor Alice Shields says Garnett was a wonderful mother to her children.

"I can tell you they were beautiful children, they are wonderful people and that mother loved those kids. She loves those kids, and I can't imagine how you could lose two babies like that and survive," said Shields.

There has been no ruling by the coroner on the cause or manner of death. The investigation is being headed by the Camden County Prosecutor's Office.