Inside the Hangar Where Eric Frein Was Captured 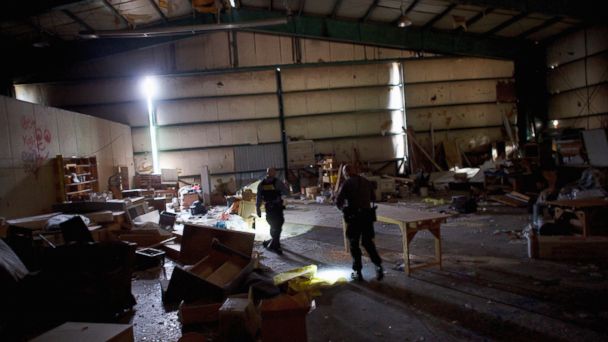 A soiled mattress, piles of old furniture and trash strewn across the floor are some of what investigators found in an abandoned airplane hangar where Pennsylvania trooper ambush suspect Eric Frein was captured earlier this week.

The U.S. Marshal's Service captured Frein, 31, on Thursday as he was walking towards the hangar at the Birchwood-Pocono Airpark. The hangar had been abandoned for 16 years.

"He had nowhere to go. There is nothing he could've done," Scott Malkowski, a task force commander with the U.S. Marshal's Service, told the Associated Press. "From what I saw, he felt defeated because we'd won. We'd defeated him."

Marshals had not received a tip directing them towards the hangar, but approached it as part of their normal search.

Inside, officials found a soiled mattress that could have been used by Frein as he evaded capture for 48 days.

Investigators are now trying to reconstruct Frein's time on the run. They believe he broke into cabins and abandoned places like the hangar for food and shelter.

Frein was also able to maintain basic grooming, as he was sporting a neatly trimmed goatee at the time of his capture. Photos of the hangar's interior show piles of old furniture and other items he could have used for supplies.

A self-trained survivalist, Frein searched online for "how to escape a manhunt" and "how to store food in hidden places" in the days before he shot two troopers, Bryon Dickson and Alex Douglass, outside their barracks in Blooming Grove, according to police. Dickson, 38, was killed and Douglass, 31, was seriously injured.

The manhunt cost $10 million as several thousand members of various law enforcement department in at least five different states spent countless hours looking for Frein. He has been questioned by police, but no parts of the interview or motive have been released.

Frein appeared in court on Friday and was charged with first-degree murder, homicide of a law enforcement officer, attempted murder and possession of weapons of mass destruction. He was not asked to enter a plea.

First-degree murder and homicide of a law enforcement officer are both capital offenses in Pennsylvania.

Get real-time updates as this story unfolds. To start, just "star" this story in ABC News' phone app. Download ABC News for iPhone here or ABC News for Android here. To be notified about our live weekend digital reports, tap here.