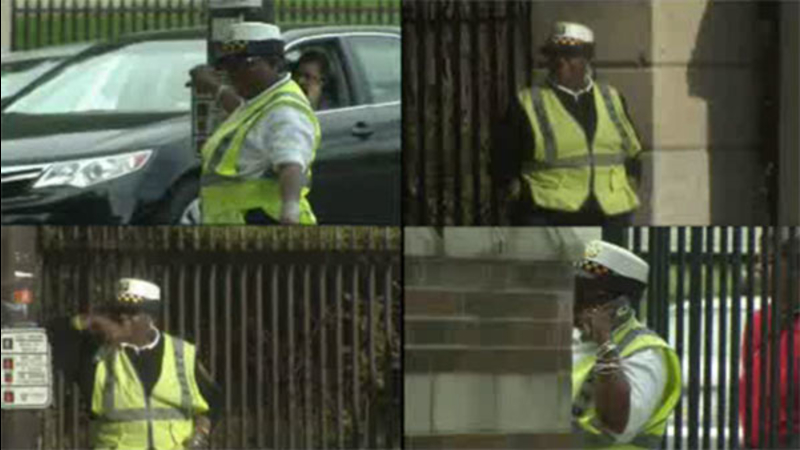 PHILADELPHIA (WPVI) -- Children should feel safe walking to and from school but Action News went undercover to investigate allegations that Philadelphia students' lives may be at risk at a dangerous intersection.

It's 8:30 in the morning at the bustling intersection of 46th and Market streets.

And for the kids who go to a nearby schools that means another day dodging traffic on this busy street as they try to get an education.

For crossing guards, that means it's prime time - they whistle, stop traffic, and direct students to make sure everyone gets to class safely.

That is, unless you're this crossing guard, at this very highly trafficked corner.

For four days in the last three weeks, we watched as this crossing guard failed to cross a single student.

Some students bolted across the street. Crowds of kids crossed alone time after time.

She pulls out her cell phone, but she never pulls out a stop sign, never walks anyone across, in fact she never makes a move, except to talk to other people walking by.

"She don't move, she don't cross the kids," said a tipster.

A tipster contacted us, after he says he called the school district twice.

"I never seen nothing like this a day in my life. She sits there on that newspaper stand all morning and don't even move," said the tipster.

His daughter was killed crossing a different street when she was 12, now he's fearful another child may face that same fate.

"I wouldn't want no parent to go through what I went through," said the tipster.

When we approached the crossing guard for a response, she defended her technique, saying in seven years, she's never had an accident.

"What I saw on that tape was absolutely unacceptable. It's against policy and training," said Chief Inspector Carl Holmes.

We took our video to Chief Inspector Holmes, who employs crossing guards for the Philadelphia Police.

"We're disturbed and we will be addressing that employee," said Holmes.

We clarified some basics with Holmes like the guards are charged with crossing children walking with their parents too.

"I'm not in charge of anything but me. That's who I am in charge of," said the crossing guard when we confronted her.

"I'm not standing there in the middle of the street, stopping traffic. Are you serious?! You get out there and stop traffic," said the crossing guard.

Holmes promised immediate action, as well as retraining for other crossing guards. And says even one day of not crossing kids, is one day too many.

"Only takes one day, one minute, one second for a child to be seriously hurt or killed and change people's lives forever," said Holmes.

The guards are paid employees for the police department. They work about four hours a day and make about $58.

The police wouldn't tell us if they were aware of previous complaints, saying that is a personnel matter, but it will be investigated.

The morning after we spoke with police, the crossing guard was back outside.