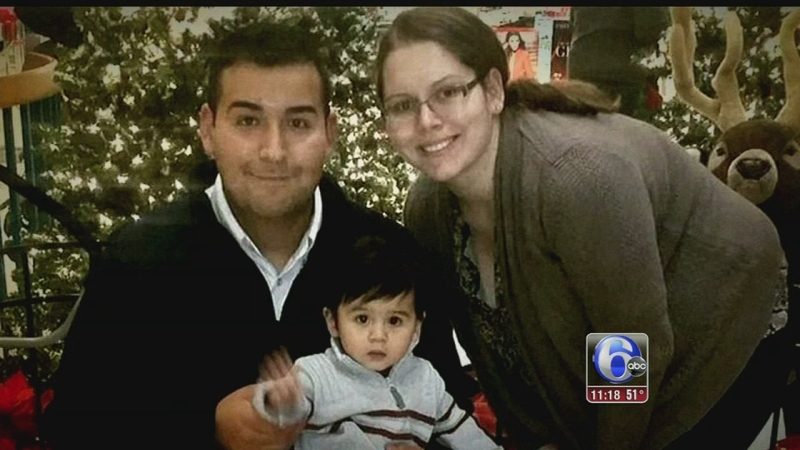 PHILADELPHIA (WPVI) -- A Berks County couple accused of child abuse claims their 3-month-old should have never been taken from their arms.

Cesar Battiato was born Jan. 6 of last year. His parents, Jessica and Cesar Sr., say he was a healthy 6 pound, 11 ounce baby boy.

"He was such a happy baby," said Jessica Battiato, mother.

But parenthood wasn't without some stress for these first-time parents. In the first three months, they say they took Cesar to the doctor approximately 13 times.

Then, when Cesar was 3-and-a-half months old, a trip to St. Joseph's Medical Center, to check on what was originally diagnosed as a bug bite on his left leg, left their family suddenly shattered.

"How does this happen? It didn't make sense to me," said Battiato.

Jessica and Cesar Sr. say they asked for the child to be transferred to Hershey Medical Center where a full-body scan was done.

The findings were horrifying: Cesar had 20 bone fractures across his body, from his fingers, to his ribs, and legs.

"How does my son have so many fractures, and is so happy?" said Battiato.

The family was given an estimate that the fractures happened 3-8 weeks back.

In that time, Cesar had multiple trips to the doctor, and not until that possible bug bite was a single bruise observed on his body.

But the medical care team, led by Dr. Kathryn Crowell, said this was child abuse.

"I'm thinking there has to be something wrong with the X-ray machine or something that was missed," said Cesar Escudero-Aviles, father.

The 3-month-old was immediately ripped out of their home, and placed in the care of the state.

"I just feel like I just lost my soul. I lost everything," said Battiato.

At first, both parents say they felt powerless to fight the accusations, but soon they started their feverish fight to prove they were innocent.

Their search led them to three leading experts in the area of Vitamin D deficiencies, a common nutrient shortage associated with breast feeding.

One was Dr. Michael Holick, a world-renowned endocrinologist at Boston Hospital, who says a lack of vitamin D can result in broken bones just from everyday handling.

"There is a very high likelihood that he was vitamin D deficient," Holick said.

Dr. Holick examined both little Cesar and Jessica. On top of the potential vitamin insufficiency, he diagnosed both with a rare genetic disorder called EDS, or Ehlers Danlos Syndrome, that can mimic the signs of child abuse.

"The combination of these two markedly increases risk for these fractures that are thought to be due to abuse when, in fact, they're due to the compromised skeleton that's very fragile," Holick said.

At a hearing this past February, Dr. Crowell testified Cesar's injuries were "consistent with inflicted injury or physical abuse."

Hershey Medical Center said in a statement to Action News, "The medical facts in this case clearly reached the level of reasonable suspicion. We support our physician's work unreservedly."

"She's made what, I think, is a misdiagnosis," said Battiato's attorney, Mark Freeman.

Freeman represents not only Jessica, but he is also the attorney for another family accused of child abuse by Dr. Crowell, whose child was also taken from their home.

In that case, the father sat behind bars for 414 days, charged with abusing his daughter and unable to make bail.

That father was ultimately acquitted at trial, and he is now suing Crowell and others, who have all denied wrongdoing.

"I feel like my baby has been kidnapped from me," said Battiato.

It has now been more than a year since Cesar was taken away.

We've reached out to Berks County Children and Youth Services for a response, but in a statement they said due to confidential provisions, they can't confirm or deny their involvement in the case.

Berks County CYS has now requested a gag order from a judge to prohibit anyone from releasing information about this case to the media.