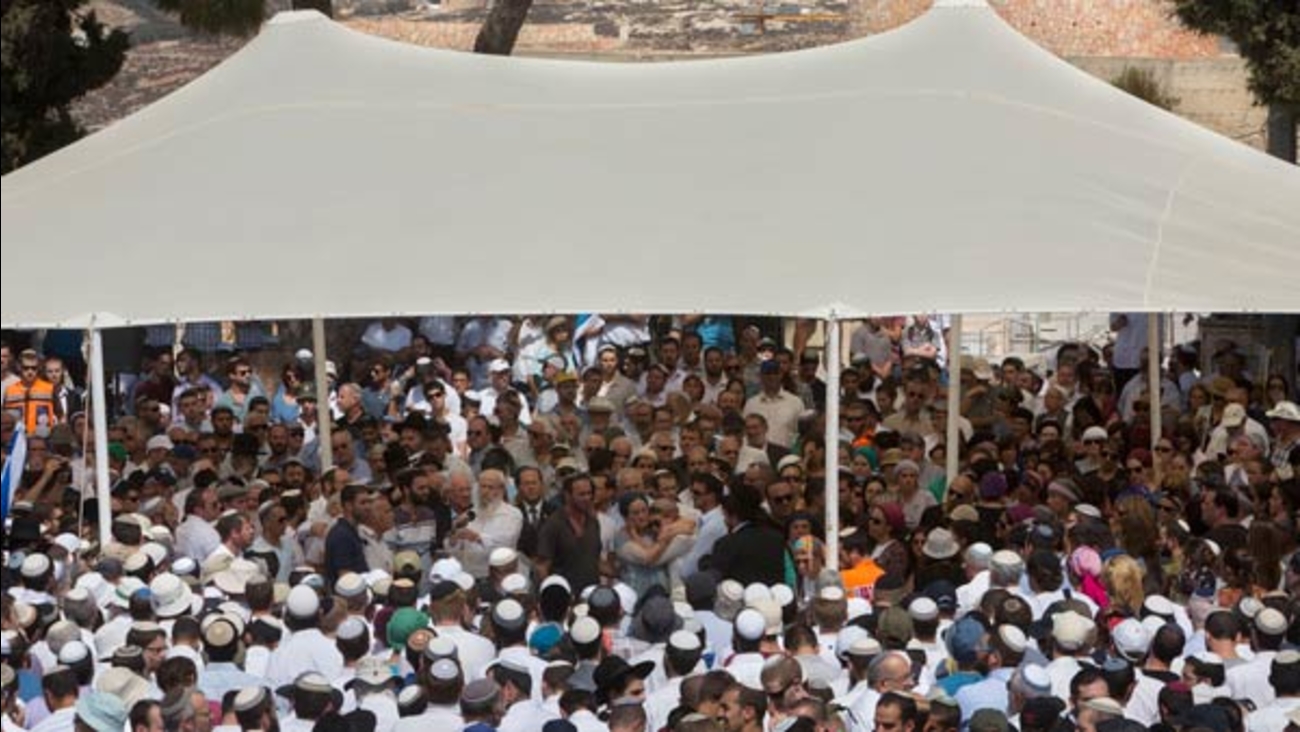 Israelis attend the funeral of Rabbi Nehemia Lavi, who was killed when a Palestinian teen fatally stabbed him and another Israeli in the Old City Saturday, in Jerusalem. (AP Photo/Sebastian Scheiner)

JERUSALEM -- In an unprecedented measure, Israeli police barred Palestinians from Jerusalem's Old City on Sunday in response to stabbing attacks that killed two Israelis and wounded three others, as Israel's prime minister vowed a "harsh offensive" to counter rising violence.

Tensions have flared in recent weeks over an Old City holy site sacred to Muslims and Jews, a series of so-called "lone wolf" attacks on Israelis and a security clampdown, which on Sunday saw Israeli troops launch a bloody arrest raid in the West Bank.

The latest spike in violence comes at a time when many Palestinians no longer believe statehood through negotiations with Israel is possible. Israeli commentators raised the possibility of a third uprising, though Palestinian President Mahmoud Abbas has so far prevented major outbreaks of violence despite his growing friction with Israeli Prime Minister Benjamin Netanyahu.

In response to the recent violence, Israeli police said they would prevent Palestinian residents of Jerusalem from entering the Old City for two days during a Jewish holiday. Palestinians who live, work and study within the Old City, as well as Israelis and tourists, will be allowed in.

"This is a drastic measure that's being taken in order to make sure there are no further attacks during the Jewish festival where you can see thousands of people visiting the Old City," Israeli police spokesman Micky Rosenfeld said.

Israel captured the Old City and east Jerusalem in the 1967 Mideast war, and later annexed the areas. Palestinians claim east Jerusalem as the capital of their hoped-for state.

Some 300,000 Palestinians live in Jerusalem, making up about a third of the city's population. They live in the predominantly Arab eastern district and have residency status in the city, but do not hold Israeli citizenship.

They are usually free to enter the Old City in east Jerusalem, where major Muslim, Christian and Jewish holy sites are located. Jerusalem expert Danny Seidemann said it is the first time since Israel captured the Old City in 1967 that it has prevented Jerusalem's Palestinians from entering.

In the latest attack, Israeli police say a Palestinian teenager stabbed and moderately wounded a 15-year-old Israeli early Sunday morning in Jerusalem before being shot dead by Israeli police.

Israeli TV showed footage of the alleged assailant walking along the city's light rail tracks as bystanders screamed, "Shoot him!" In the video, a police car arrives on the scene, multiple gunshots are heard, and the attacker is then seen lying on the ground.

The attack came hours after a Palestinian teen fatally stabbed two Israelis in the Old City and wounded the wife and toddler of one of the slain men, before the attacker was shot dead by an Israeli police officer. Israeli officials identified the victims of Saturday's attack as Aharon Banita, a 21-year-old soldier, and Rabbi Nehemia Lavi, a father of seven who was a rabbi at a seminary in the Old City's Muslim Quarter.

Tensions have soared in recent weeks over a major holy site known to Jews as the Temple Mount and to Muslims as the Noble Sanctuary, the site of the Al-Aqsa Mosque. Israeli police and Palestinian demonstrators have clashed repeatedly there in recent weeks.

The unrest has spread to the West Bank, where at least 18 Palestinians were wounded in clashes with Israeli troops Sunday during an Israeli arrest raid. On Friday, an Israeli couple was killed in a Palestinian drive-by shooting in the West Bank.

Netanyahu said he would meet with security officials Sunday to decide on a "harsh offensive on Palestinian Islamic terror," according to a statement on his Facebook page. "We are in an all-out war against terror," Netanyahu wrote.

Israel's leading newspaper commentator, Nahum Barnea, called the recent violence the "Third Intifada," referring to Palestinian uprisings in the 1980s and the early 2000s. "Not calling it by name allows the political and military establishment to evade, repress, shirk responsibility," he wrote in the Yediot Ahronot newspaper.

Relatives of the teen behind Sunday's attack identified him as Fadi Alloun, 19, from traditionally Arab east Jerusalem. On Saturday, he wrote on his Facebook page: "Either martyrdom or victory."

Muhannad Halabi, the 19-year-old Palestinian behind the deadly stabbing attack on Saturday, also wrote a post on Facebook before the attack: "What's happening to our holy places? What's happening to our mothers and sisters in the Al-Aqsa mosque? We are not the people who accept humiliation. Our people will revolt."

The sacred hilltop compound is a frequent flashpoint and its fate is at the core of the Israeli-Palestinian conflict. It is known to Jews as the Temple Mount, site of the two biblical Jewish temples. Muslims revere it as the Noble Sanctuary, where they believe the Prophet Muhammad ascended to heaven in a night journey.

Non-Muslim visitors are only allowed to enter the site at specific hours and are banned by police from praying there. Many Muslims view Jewish visits as a provocation and accuse Jewish extremists of plotting to take over the site. Israel has promised to ensure the delicate arrangement at the site and insists it will not allow the status quo there to be changed.

In the West Bank, Israeli troops shot and wounded at least 26 Palestinians in an arrest raid in the Jenin refugee camp, a Palestinian hospital director said. The refugee camp was the scene of some of the fiercest fighting of the second Palestinian intifada.

Monther Irshaid, director of the Khalil Suleiman Hospital in Jenin, said the Palestinians were shot in the legs with live bullets and two suffered serious leg injuries.

The clashes broke out as troops surrounded the home of a Palestinian suspect. Witnesses said Israeli troops fired a "small missile" at the house to force the suspect out. The Israeli military said a few dozen Palestinians attacked troops with pipe bombs and that troops responded with "riot dispersal means."

Troops arrested two Palestinians suspected of "terror activity," the army said. One armed suspect barricaded himself inside a building and a fire broke out during the arrest, the army said without elaborating. The army said troops found explosive devices inside.