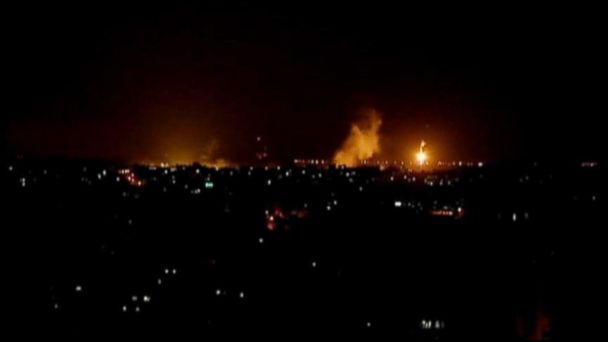 ABCNews
By ALEXANDER MARQUARDT
Israeli forces have launched a "ground phase" in its effort to halt rockets being fired at Israel from Gaza, the Israeli military confirmed today.

The incursion into Gaza "will include close coordination between IDF units including infantry, armored corps, engineer corps, artillery, and intelligence combined with aerial and naval support," the Israel Defense Forces said in a statement.

The Israeli army said the offensive is meant to strike a "significant blow to Hamas' terror infrastructure."

Until today the battle has consisted of Hamas, which controls Gaza, launching rockets at Israel and Israel hitting what it calls terrorist sites in Gaza with fighter jets and naval guns. Israel twice halted its attacks and negotiations with Hamas for a more permanent ceasefire were being conducted in Cairo, Egypt.

The IDF said today it sent troops into Gaza "Following 10 days of Hamas attacks by land, air and sea, and after repeated rejections of offers to deescalate the situation."

Everything You Need to Know About the Conflict

The location of the "ground phase" and the number of troops involved was not immediately available, but Israel had called up 48,000 reservists in recent weeks and had massed troops and tanks near Gaza's border. It has also warned tens of thousands of people in Gaza to evacuate their homes for their own safety.

Before the latest assault, 231 Palestinians and one Israeli had been reported killed in the ferocious barrages between Hamas and Israel.

Gaza had started the day with a rare break in attacks as both sides observed a "humanitarian pause" to allow Gazans to stock up on supplies. But the moment the five hour deadline arrived, a mortar round fired from Gaza hit Israeli territory, the IDF said. Israel resumed its own bombing campaign a short time later, according to the IDF.

In the hours before the incursion, powerful flares fired by Israel lit up the sky over Gaza, ABC News correspondents in Gaza reported. Foreign media in a hotel near the waterfront in Gaza were told by Israel they had to evacuate the building and tracer fire could be seen hitting sites in Gaza.