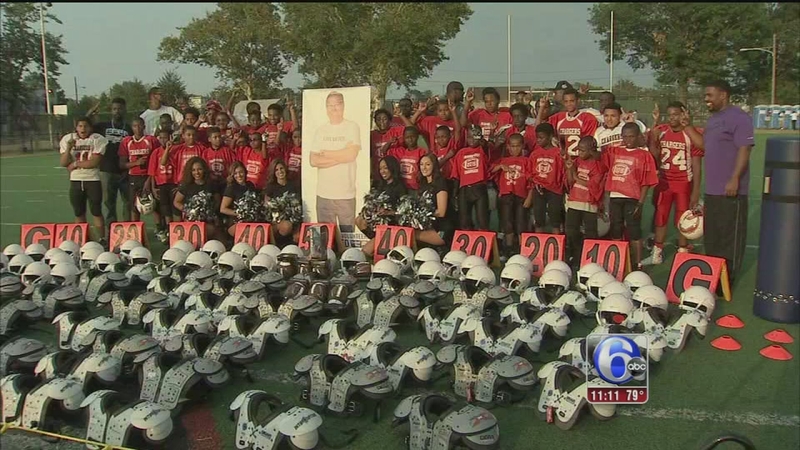 FRANKFORD (WPVI) -- A youth football team in the Frankford section of Philadelphia was all smiles, but not due to a winning touchdown or interception, but because they were able to have a real practice after their equipment was stolen a month ago.

The Frankford Chargers took part in a field day Tuesday evening including a round of practice with members of the Philadelphia Soul arena football team.

Soul cheerleaders were also on hand as the group posed for pictures with all their new equipment.

"The kids are super excited to come out here and see all the actual equipment. They were more excited to see the cheerleaders," State Representative Jason Dawkins said.

Last month, vandals broke into the storage shed stealing a lot of the team's equipment.

It was big blow considering that last year the Chargers celebrated an undefeated season and won the 2014 American Youth Football National Championship in Florida.

There's a long proud tradition on their home turf of Gambrel Field; it is where the Philadelphia Eagles began as the Frankford Yellow Jackets.

Jaworski, a former Eagle, wants to make sure that tradition carries on.

"The fact that these kids had that taken away from them is absolutely mind-boggling to me that they couldn't play a game that they love. I just felt that it was the right thing to do to try and get these kids some equipment," Jaworski said.

The players themselves are very excited about the new equipment and what it means to morale.

"I thank him for donating this equipment cause we needed it," Fateea McFadden said.

Since our report a few weeks ago, the Chargers' equipment room has been broken into five more times. But the new equipment is not going to be placed there. It will be stored in a recreation center where they know it's going to be safe and secure.

"When someone takes something from a child, you start to believe that no one cares, but now we see these things being brought back, they know that someone out there listens to our cries and they answered the call," Dawkins said.