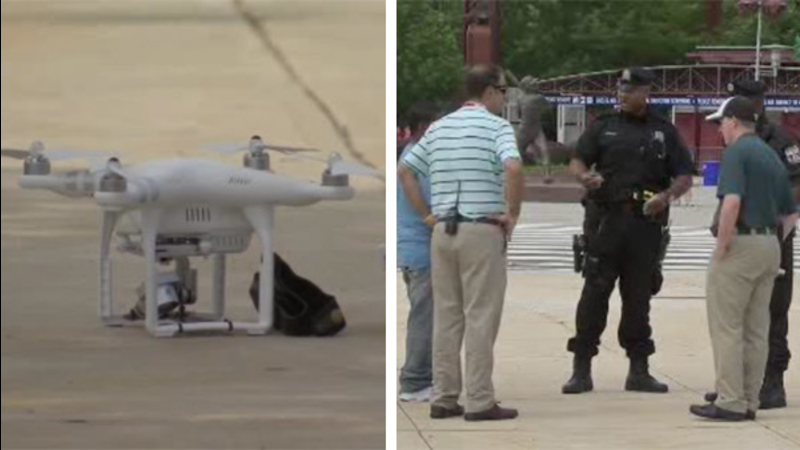 SOUTH PHILADELPHIA (WPVI) -- The Federal Aviation Administration said on Monday it was investigating the incident in which a drone was flown just outside Citizens Bank Park during a Phillies game.

It happened around 4 p.m. Sunday.

In a statement that read, in part, the FAA said it "bars unauthorized aircraft, including drones, from flying over or near Major League Baseball games, as well as other major sporting events."

In addition, the ballpark is within the Philadelphia International Airport's "no drone zone."

Phillies security was also alarmed when the drone hovered, looking in.

"Once you see a drone up in the air, you never know the intent of the operator, and that's what causes concern for security operators all around Major League Baseball," said Sal DeAngelis, the head of security.

In this case, the operator was deemed a hobbyist who only wanted to take pictures. After talking to him police let him go, and returned his $1,000 drone.

However, they asked him to erase the pictures he took, citing intellectual property rights.

Concerns about hobbyists unaware of where they can fly, as well as those who could do harm, are a headache for many in security.

We are told with the upcoming papal visit, concerns with stopping unauthorized drone use are intense.

Cheryl Sigg is president of Sky Philly, the state's first commercial drone operation. Its operator is a licensed pilot who knows airspace protocol, and their professional gear used for many legal uses.

"It's the wild west of drones out there right now, and they have to come up with some type of regulation that everyone understands and will follow," said Cheryl Sigg of Sky Philly.

For DeAngelis, it starts with a simple request about the ballpark.

"One thing I say is if you have a drone, leave it at home."

While no criminal charges will be filed it's still possible that the operator will face an FAA penalty or even a fine.