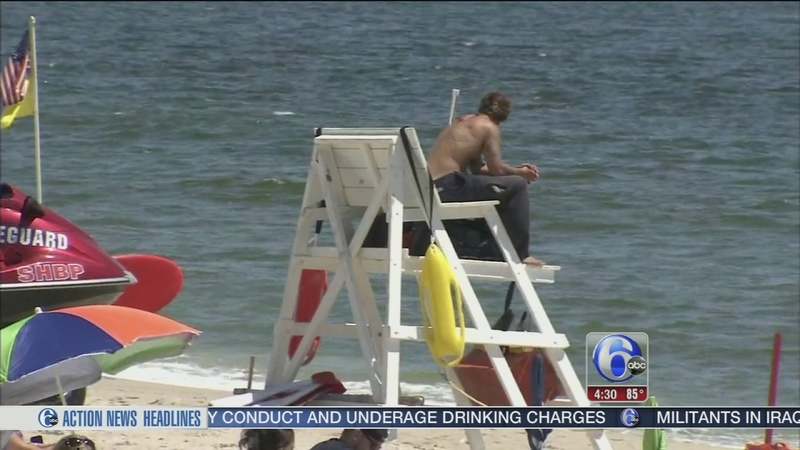 On Saturday evening, lifeguards in Seaside Heights were wrapping up operations for the day when two men were swept out to sea in a rip current.

Lifeguards swam to rescue the men, but when they got back to shore one of the pair had a strange way of showing his appreciation:

"He swung his arm and struck one of the lifeguards in the face," said Chief Jay Boyd of the Seaside Heights beach patrol.

"At that time the lifeguard tried to get him under control and he struck another lifeguard in the face."

The rescuers weren't hurt but the attack caught the lifeguards off-guard. It's not the way people usually react after they've been pulled out of the water.

Some beachgoers said they would have been more appreciative!

"I would be thanking him, sending him Christmas cards every year or something because he just saved my life," said Jennifer Robillard of Plainville, Massachusetts. "He must have been shocked. I mean if I saved someone's life, I wouldn't expect a punch in the face!"

"It's crazy how he saved the guy and the guy comes out and punches him," said Dillon Treon of Nazareth, Pa. "'Well, thank you for saving me, but...!'"

Officials say 20-year-old Ivan Rivera of Plainfield, the man who allegedly took the swing, was operating on more than adrenaline after he was rescued.

They say he was clearly intoxicated.

Rivera has been charged with assault, disorderly conduct and underage drinking. Because it's a pending court matter, beach patrol officers don't want the guards involved to comment.

But others are not shy about offering their opinion

"You're an idiot. Just really dumb. He should have been thankful and appreciative and thank God that he was fine," said Joanne Hector of Forked River, New Jersey.

"Doesn't matter, there's no excuses. He shouldn't have drank too much," said Ryan Ravitsky of Nazareth, Pa.

Still, Chief Boyd said while the young man may one day regret his actions, "the main thing is we were able to save him."