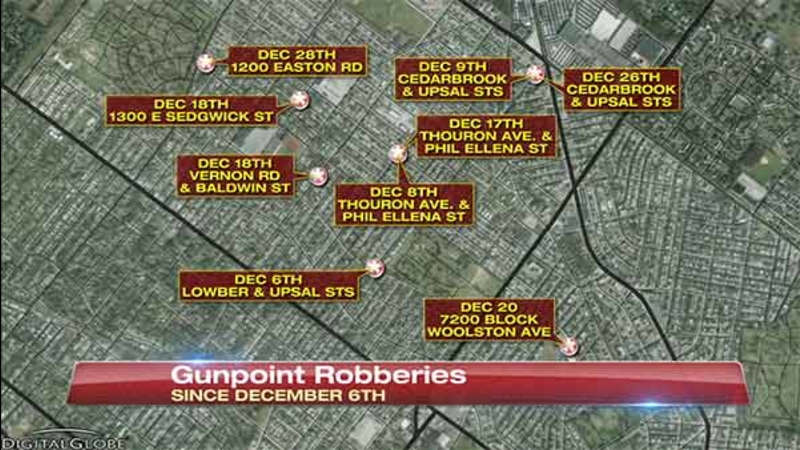 WEST OAK LANE (WPVI) -- The Philadelphia Police Department is seeking the public's assistance in locating a man wanted in connection with a series of reported gunpoint robberies at bus stops in West Oak Lane.

Police said all but one of the victims are women targeted by a suspect matching the same description at different times of the day.

"Like I said it looks like he's targeting women that are by themselves at the bus stop early in the morning," said Philadelphia Police Lt. John Stanford.

The victims were on their way to work or out and about when the suspect approached them - sometimes at the bus stop, police said. He pulled a gun and demanded their cell phones.

"The cell phones seem to be what he's targeting, but again he's armed with a hand gun so, you know, anytime you have these situations where someone is armed, very dangerous situation." said Stanford.

A woman was robbed of her cell phone at gunpoint while waiting for the bus, police said.

Pansy Nelson, who lives in an apartment in the area, tells Action News she takes the bus and often worries about her own safety and that of others.

"I just pray for the bus to come up early because I know what it is when you're a female and you're standing there in the dark," said Nelson.

Bonnie McLymont said she has often turned down her daughter's offers to drive her to the bus stop, but not anymore.

"Six of them? Oh Lord, I'm not going to argue with her no more," said McLymont. "Take me to the bus stop or I'm not going until it gets light."

Police say that's the right idea. Take precautions and report anything out of the ordinary.

The suspect is described as a light-brown complexioned black male, early to mid-20s, medium build, 5 foot 6-8 inches with facial freckles, discoloration and/or a mole. He was seen wearing a dark hooded sweatshirt and dark pants.

Police are planning to put up flyers. They tell Action News they want residents - especially women - to take precautions.

"Be on the lookout for anybody that's suspicious," said Stanford. "This guy could possibly be in a vehicle and then exiting that vehicle approaching these women or on foot. He may be living in the area.

"If you see something like that, someone hanging around, go inside a gas station, call 911 and, again, we're hoping that changing deployment, we may be able to get this guy off the streets."