Man, woman wanted in Delaware shot and killed by police in Maryland

WPVI
1 / 22
The suspects are identified as Brandon Jones, 25, and Chelsea M. Porter, 25, both from Dover, Delaware.
ELKTON, Md. (WPVI) -- Authorities say a man and woman wanted in connection with a shooting in Delaware were shot and killed by police after a confrontation at a motel in Elkton, Maryland.

Police say they were armed with what appeared to be handguns but were later determined to be BB guns.

They have been identified as Brandon Jones, 25, and Chelsea M. Porter, 25, both from Dover, Delaware.

It happened after 10:30 a.m. Tuesday at the New Eastern Inn at 291 E. Pulaski Highway (Route 40), about 20 miles southwest of Wilmington, Delaware.
According to Greg Shipley, spokesman for the Maryland State Police, state troopers were serving a search warrant at one of the motel rooms when the confrontation unfolded.

The subjects of the warrant were wanted by Delaware State Police for possession of firearms in connection with a shooting earlier this week in Delaware, Shipley said.

Authorities say a man and woman wanted in connection with a shooting in Delaware were shot and killed by police after a confrontation at a motel in Elkton, Maryland.

When police announced their presence, Shipley said, Jones emerged from the room and raised a weapon in the direction of police. After ignoring their commands to drop the weapon, police opened fire, killing him.

A short time later, Porter came out of the room and also raised a weapon. Police told her to drop the weapon, but she did not. Police fatally shot her, as well.

Contrary to earlier reports, no other suspects were involved in the confrontation, Shipley said.

No police officers were hurt in the incident.

The Maryland State Police Homicide Unit is conducting the investigation, as is procedure in police involved shootings.

Investigators are working to determine how many police officers fired and what departments they are from. Investigators have determined one of the officers who fired is a trooper from the Maryland State Police. He has been placed on administrative leave, as is procedure pending the outcome of the investigation.

The incident and subsequent investigation brought numerous police units to the area, including SWAT teams.

Video from Chopper 6 HD showed a number of police officers surrounding the two-story motel for over an hour with their weapons drawn.

At this time, it is believed one is a BB pistol and the other is a compressed air-powered pellet or BB gun. 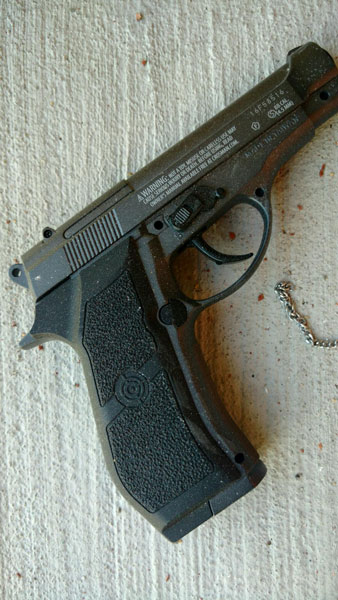