ALLENTOWN, Pa. (WPVI) -- The United States used 59 Tomahawk cruise missiles in an airstrike against a Syrian air force base Thursday night, all aimed at destroying the planes accused of dropping deadly sarin gas on civilians.

On Friday, U.S. Ambassador to the United Nations, Nikki Haley, told members of the Security Council the United States is prepared to take further action against the country to prevent chemical weapons attacks, but hopes it won't be necessary.

The Syrian government and their ally Russia have since denounced the strikes as an act of aggression, and many members of the Syrian community in Allentown, Pennsylvania agree.

"The president came out and said he didn't want any regime change, he didn't want to get involved in Syria, and all of a sudden now a couple days later he is getting involved. So, everybody is a little bit baffled and confused," said Dan Azar.

Syrians began moving to Allentown more than a century ago. You can find shops there owned by Syrian Americans stocked with foods for a Syrian palate.

Donald Trump won votes in Allentown in part because as a candidate he signaled he would fight ISIS and be hands off with the Assad government. But Thursday night's attack changed that.

"We became the judge, the jury, and the executioner," said Father Anthony Sabbagh, stressing that he is speaking for himself, not his church.

The trip wire for Trump was the use of chemical weapons this week in Syria.

"This attack, to many Syrian Americans, is a hoax," said Hope Sabbagh.

The thinking behind that statement is that ISIS is responsible because Assad would not risk world condemnation, since he is already successfully winning with conventional weapons.

"The Syrian government is taking over areas that before was under ISIS," said Father Sabbagh.

Some in this community have demonstrated for Assad in the past. They view him as a stable, fair force. They fear Trump's shift could topple Assad and lead to a chaos where Islamic extremist take control.

The demonstrators in Allentown Friday evening say they are convinced that if Assad is toppled by the West, chaos will follow.

"The next day, ISIS will be in Damascus, after that Jordan, Lebanon, and within a month will be in Europe," said Dr. Khahdoun Makhoul. "It would be chaos all over the area, not just Syria."

Many in Allentown say they still have family in Syria. For them the answer is obvious - Assad may be flawed, but his government is still the best way forward for Syria at this point in time. 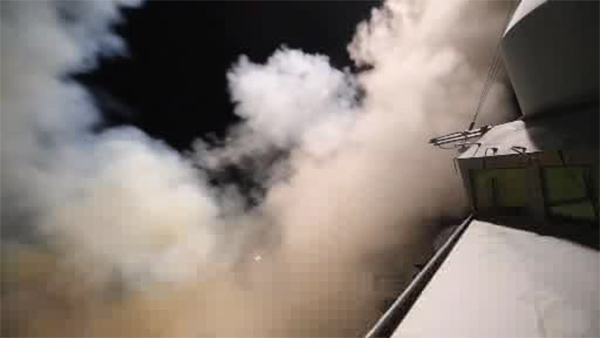 US strikes win global praise, but ratchet up Russia tension