Part 1 of the PA Senate Debate.

Part 2 of the PA Senate Debate.

The candidates fielded 16 questions in the live, televised hour-long debate at Temple University that put the candidates' deep ideological divide on display. The strident attacks also underscored the closeness of the race.

The first-term Toomey is among the Senate's most endangered Republicans, running for re-election in Democratic-leaning Pennsylvania after compiling one of the most conservative voting records in Congress.

The GOP is struggling to keep its 54-46 Senate majority, and the neck-and-neck race could tip control to Democrats.

The two quarreled over whose side had to pull down a TV ad and who had engaged in predatory behavior in business dealings. At times, whole questions went unanswered while they attacked each other. They even squabbled over a question about whether months of negative campaign ads contribute to a general sense of distrust of and distaste for politics and government.

"I'm not sure your respective answers have done much to eliminate distrust and distaste," moderator Jim Gardner told them.

Other times, McGinty tried to paint Toomey as an out-of-touch Washington insider, suggesting that he had missed "some 90 percent of the key committee hearings and meetings on our critical national security issues" and that he had been in Washington for 18 years - six as a senator - and done nothing to improve health care access.

Toomey, who supports repealing President Barack Obama's health care law, called McGinty's claim about missing committee hearings false, and repeatedly sought to paint her as a habitual liar. He several times referred back to her statements made on the campaign trail that she was the first in her family to go to college before a news report emerged in June that showed an older brother had graduated from college years earlier.

Toomey used that example to tie McGinty to Democratic presidential nominee Hillary Clinton, who McGinty has endorsed, campaigned with and backed on key policy positions.

"Maybe it's Katie McGinty's problem with the truth that allows her to overlook Hillary Clinton's chronic lies," Toomey said.

Meanwhile, Toomey stuck to a tightrope of not endorsing GOP presidential nominee Donald Trump, but not disavowing him, either.

On abortion, the talk got tough, as Democrats have sought to use the issue against Toomey with moderate voters in Philadelphia's heavily populated suburbs. Toomey, who opposes abortion rights, and McGinty tried to paint each other as extreme.

"You don't perform an abortion on a baby that's about to be delivered, someone that's very far along, a 7-pound baby girl kicking in her mother's womb, but Katie McGinty's perfectly fine with that," Toomey said. "There's no point at which an abortion should be unacceptable for her."

McGinty said she stands for allowing women to make decisions that are medically complex with their families and doctors.

"Senator, this should be not about politics, and your position on this has been decidedly out of the mainstream, joining with Donald Trump in saying that women or their doctors should be jailed for having to make these excruciating decisions," McGinty said.
Related topics:
politicsdonald trumppa. newsdebate2016 electionhillary clinton
Copyright © 2020 WPVI-TV. All Rights Reserved.
RELATED 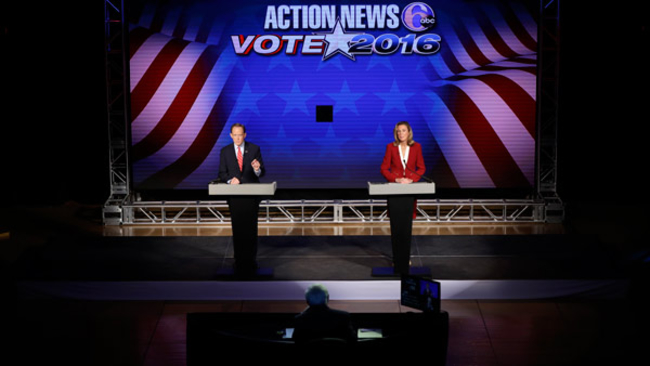