N.J. State Trooper dies after being struck by car on I-295 in West Deptford

WPVI
WEST DEPTFORD, N.J. (WPVI) -- A New Jersey State Police trooper has died after sustaining head injuries after being struck by a vehicle on I-295 in West Deptford.

"His family members and numerous troopers and law enforcement personnel from several different agencies held vigil late into the night at the hospital. Doctors pronounced him deceased shortly after 12:30 a.m. Colonel Rick Fuentes broke the news to those gathered in a waiting room," the post said. 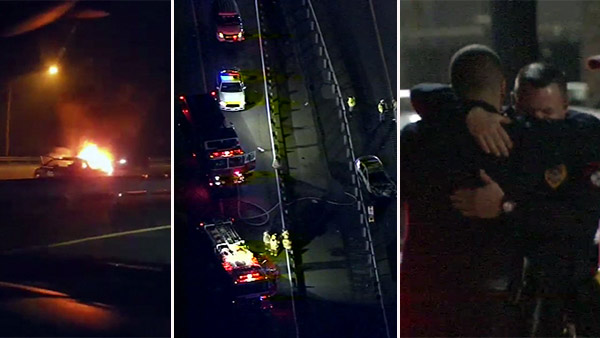 PHOTOS: NJ State trooper killed in I-295 crash
A New Jersey state trooper died after being struck by a car on I-295 in West Deptford.

Trooper Cullen was born in Dublin, Ireland in 1985 and moved to the United States in 1988. He went to Cinnaminson High School, and was hired by Westampton Township Police as a patrolman in 2012. He was then hired by the New Jersey State Police in August, 2014.

He was stationed in Bellmawr and was a member of the 154th State Police Class.

Troopers salute as flag raised, then lowered to half staff in Bellmawr, where fallen Trooper Cullen was stationed. pic.twitter.com/97l9YLchOT

The crash that claimed Cullen's life happened around 8 p.m. Monday on I-295 near Exit 23 (Crowne Point Road). He was responding to a fiery crash in the southbound lanes.

An Action News viewer captured the car fire video from the scene where Trooper Sean Cullen was struck and killed on I-295 in West Deptford, New Jersey.

Investigators say he walking near the scene of the active car fire, with several fire and police vehicles on site, when he was struck by a vehicle passing the scene.

The stopped vehicle that was on fire was also struck. The impact of that crash caused the burning vehicle to spin around.

A New Jersey State Trooper sustained serious injuries after being struck by a vehicle on I-295 in West Deptford.

A medical helicopter transported Trooper Cullen to Cooper University Hospital, where he was pronounced dead four and a half hours later.

State police say the 22-year-old female driver of the striking vehicle stopped nearby after the collision and was cooperating with investigators.

She and another woman were also taken to the hospital for treatment. There was no immediate word on their conditions.

All southbound lanes on I-295 and the left northbound lane of the highway were shut down in the area for hours while authorities investigated the incident.

The leader of the New Jersey State Police said Cullen's death has an impact on everyone.

"It's a terrible tragedy for the organization. It sends shockwaves through the organization," said New Jersey State Police Superintendent Col. Rick Fuentes, reacting to news of Cullen's death.

"I believed right up until the end. We held out hope that there would maybe be a miracle in this case."

At the Westampton Township Police Department on Tuesday, flags were lowered in his honor.

"He legitimately was a great guy and I'm going to tell you, there's probably not a single person who would say a negative thing about him," said Sgt. Victor Bialous.

It was a lifelong dream of Cullen's to join the New Jersey State Police.

"It was everything. I think becoming full time here in Westampton was everything to him, but I think when he had the opportunity to work side-by-side with his brother and be a state trooper, that was his goal," Bialous said.

A New Jersey State Trooper has died after sustaining head injuries after he was struck by a vehicle on I-295 in West Deptford.

Cullen was remembered for his quick wit and as a man who was proud of his Irish heritage, and proud of his growing family.

"Family means everything to him. He comes from a nice, tight-knit family" said Bialous.

Cullen is survived by his fiance, 9-month-old son, mother, father, two brothers, and a sister.