No charges for Wilmington cops in killing of man in wheelchair 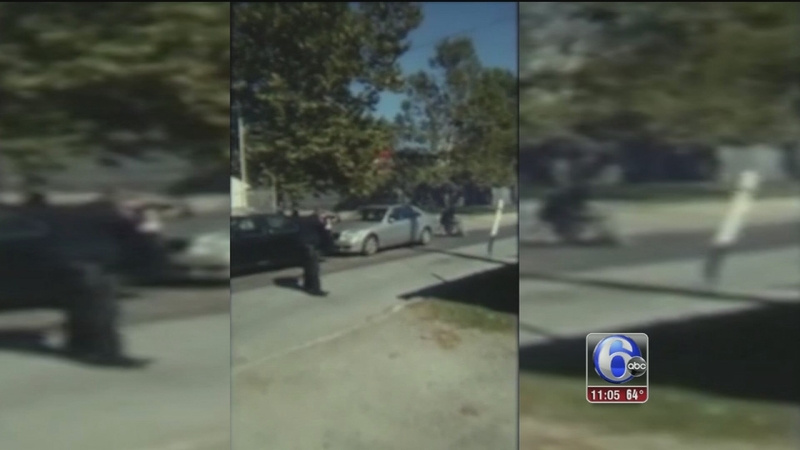 VIDEO: No charges for Wilmington cops

WILMINGTON (WPVI) -- Criminal charges cannot be brought against four Wilmington police officers involved in the fatal shooting of a man in a wheelchair, although one officer exhibited "extraordinarily poor" police work and should not be allowed to carry a gun in public, the Delaware attorney general's office concluded in a report released Thursday.

State officials also said their investigation into the September shooting of Jeremy McDole revealed serious deficiencies in the Wilmington police department's use-of-force policies and training, and in preparing officers to deal with people with mental illness and other disabilities.

"Most significantly, we find that the "continuum of force" provisions of the Wilmington Police Department's use of force policy are effectively meaningless for police officers as currently written," officials noted in the 31-page report.

Police confronted McDole on Sept. 23 after receiving a 911 call about a man with a gun.

A bystander's cellphone footage shows officers repeatedly telling McDole to drop his weapon and raise his hands and McDole reaching for his waist area before shots erupt.

In court records that predate last year's shooting, law enforcement officials have stated that McDole, who was shot in the back by an associate in 2005, used his wheelchair to hide things.

The attorney general's office, which investigates all incidents involving police use of deadly force, concluded that Senior Corporal Thomas Silva, Corporal Thomas Lynch, and Corporal James MacColl were justified in shooting McDole because they believed that deadly force was necessary to protect themselves or others.

But authorities said they considered charging Senior Corporal Joseph Dellose with felony assault, based upon his decision to immediately confront McDole and fire his shotgun at him instead of communicating with officers who Dellose knew were already on the scene.

State officials hired a former federal prosecutor from Pennsylvania to prepare a possible criminal case against Dellose, and also consulted with two experts who reviewed the shooting of Tamir Rice in Cleveland. But those experts, Jeffrey Noble, a former deputy police chief in Irvine, California, and Roger Clark, a former lieutenant with the Los Angeles County Sheriff's Department, concluded that Dellose's actions did not amount to criminal conduct under Delaware law.

Dellose, who was also involved in a fatal shooting in January 2010, told an investigator that McDole did not respond to his repeated commands to show his hands, and that he caught a glimpse of the handle of a gun.

"I couldn't see his hands, he kept moving around his waist," Dellose told the investigator. "At that point, I felt I was in danger, my life was in danger if he picked up that gun and started shooting.... That's when I decided I had to fire one round."

Investigators said the cellphone video shows that Dellose gave McDole two commands within the space of about two seconds before firing his shotgun, which further alarmed other officers on the scene about what dangers they were facing.

Thomas Neuberger, an attorney representing the McDole family in a federal lawsuit, said in a prepared statement that the attorney general's report would not affect the court case.

"While the Attorney General has never criminally prosecuted a Delaware police officer for a killing, we will continue to seek justice for Jeremy's family in federal civil court and pursue the truth," Neuberger said, adding that the officers' tactical response reflected "deliberate indifference" for McDole's life.

"Before using deadly force, Jeremy could have been talked down by a properly trained professional using historic police methods," Neuberger said.

Attorneys for the city have asked a judge to dismiss the family's lawsuit, arguing that McDole was armed with a gun and that the officers acted properly. According to the city's court filing, and reiterated in the attorney general's report, McDole was armed with a revolver and had evidence of gunshot residue on his hand, contradicting claims by McDole's family that he was unarmed and implied that police planted a gun on him after the shooting. The attorney general's investigation found that six officers at the scene all reported seeing a gun in McDole's pants after he was shot. Investigators determined that the gun had been legally purchased in South Carolina in 2009 and later reported stolen from the glove compartment of the owner's truck.

A police detective said in a court affidavit that officers found a .38 caliber revolver with four spent casings and two live rounds in McDole's underwear after they went to render first aid.

In its report, the attorney general's office said an individual who identified himself as McDole's godfather told investigators that on the morning of the shooting, he had wheeled McDole to the "Browntown" section of Wilmington so McDole could get a gun and PCP-laced cigarettes known as "dippers."
Related topics:
wilmingtonpolice involved shootingdelaware newsshootinglawsuit
Copyright © 2021 WPVI-TV. All Rights Reserved.
TOP STORIES
'The View' chaos sparked by false-positive COVID-19 test results
Arrest warrant issued in shooting at Montco Wawa
Trial for Montco teen charged with stabbing ex-girlfriend 30 times
76ers confirm Simmons won't report to training camp
Physician Support line offers help for overstressed doctors, nurses
Andy Reid in stable condition at hospital
Shooting outside Center City hotel under investigation
Show More
Cheryl Burke says she has COVID-19
Record-breaking! 66-yard field goal makes NFL history
Eagles/Cowboys on MNF! How to watch, score prediction and more
Pfizer to ask for approval of COVID vaccine for kids in matter of days
Mayor: 'I am heartbroken and outraged' after city tops 400 homicides
More TOP STORIES News