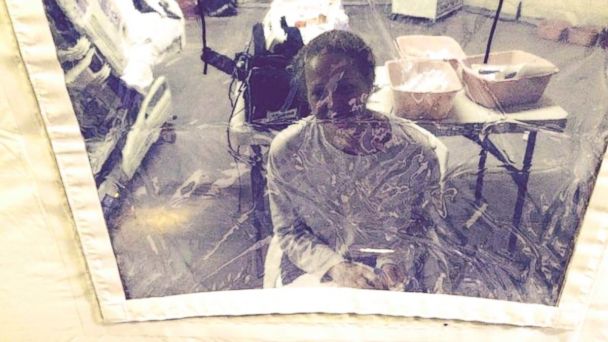 ABCNews
By DEAN SCHABNER
The lawyer for a nurse in a 21-day mandatory quarantine in a New Jersey hospital after she returned from treating Ebola patients in Africa said Sunday he is planning to file a federal suit to get her released.

Kaci Hickox said she feels that her "basic human rights are being violated," kept in a isolation tent at Universisty Hospital in Newark, despite showing no symptoms of the Ebola virus.

He said he is planning to file a federal suit to challenging her confinement if he cannot get her released, he told ABC News.

"There's some indication that we might get her released relatively soon," Siegel said, but he would not elaborate.

Hickox, who was treating Ebola patients in Sierra Leone for Doctors Without Borders, never registered a fever so there is no medical reason to keep her quarantined, he said.

She is the first person quarantined under a new strict policy instituted by New Jersey Gov. Chris Christie on Friday.

New York, Illinois and Florida also instituted mandatory quarantines for anyone exposed to people infected with Ebola health. New York Gov. Andrew Cuomo announced that the state will allow home quarantines for people showing no symptoms, rather than requiring isolation in hospitals.

The policies have drawn the attention of the Obama administration, which told the governors of New Jersey and New York that there are "concerns" about the mandatory quarantines, a senior administration official said today.

"We have let the governors of New York, New Jersey, and others states know that we have concerns with the unintended consequences of policies not grounded in science may have on efforts to combat Ebola at its source in West Africa," the official said.

"We will continue to consult with the states as these guidelines are developed, and we expect to have more to say on this in the coming days," the official said.

Hickox told CNN she is being held in a "tent structure" outside of University Hospital, "with a port-a-potty like structure and no shower and no connection to the outside world except my iPhone."

"This is an extreme that is really unacceptable, and I feel like my basic human rights have been violated," Hickox told CNN.

She wrote an op-ed for the Dallas Morning News, in which she detailed her ordeal, in which she said she was held for six hours at Newark Liberty International Airport before being taken to the hospital quarantine.

Medical experts say that there is no reason for mandatory quarantines, since unless a person is showing symptoms of Ebola, they are not contagious.

"As a scientist and as a health person, if I were asked I would not have recommended [mandatory quarantines]," Dr. Anthony Fauci, director of NIH's National Institute of Allergy and Infectious Diseases, said today on "This Week."

Christie has said he concluded the quarantine was necessary to protect public health in his state and that he thinks the CDC "eventually will come around to our point of view on this."

Fauci and other critics of mandatory quarantines are counting on "a voluntary system with folks who may or may not comply," Christie said.

In an interview on "Fox News Sunday," Christie said that CDC protocols have been "shifting" and pointed to an incident in Princeton when a journalist and her crew who had been to West Africa and had been told to self-quarantine went to a restaurant to get takeout food and were "walking around the streets of Princeton."

Fauci said health care workers who return to the U.S. after treating Ebola patients -- like Hickox and Dr. Craig Spencer, a New York doctor currently quarantined in Bellevue Hospital -- are responsible and know that if they have symptoms it is possible they could transmit the disease.

"They don't want to get anyone else infected," he said.

Hickox said she feels "physically strong." She said she has tested negative for Ebola, and no one has indicated to her how long she will stay under quarantine.

"Even to this day no one has told me how long it will last, if I will be retested," she told CNN. "This is unacceptable. I want answers for what is my clear plan."

"When you read her letter, it's actually chilling to think that someone who risked their life and went over the West Africa to try and help people and stop this epidemic, when she arrives in the U.S. is treated so poorly," he said. "She describes a situation where it was hours before people explained what was going on and why she was being isolated. This is someone who was not sick and is being treated as if she is in essence a leper."

Besser said that a better approach would be that taken by Doctors Without Borders, the organization that has taken care of more Ebola patients than any other in the world. Their health care workers monitor themselves for 21 days, and if they show any symptoms, they are isolated and they're tested.

"With that approach, they've never had a health care worker spread the disease to anyone else. So why we have to go above and beyond that, it just baffles me," Besser said.

That was the approach taken with Spencer, who treated patients in Guinea and self-monitored when he returned to New York City. He had no symptoms until Thursday morning, when he had a fever. At that point he contacted the CDC and has since been quarantined.

His fiancee, Morgan Dixon, and two other people he came into close contact with have also been quarantined, but they haven't shown any symptoms.

Besser said that the mandatory quarantines not only do not seem medically necessary, they encourage the public to believe falsely that Ebola is easily communicable.

"The other downside on these mandatory quarantine is it sends a mixed message to the public," he said. "When you see people being isolated who don't have any symptoms it raises the idea of 'well, maybe it's easier to get this infection than people are telling us otherwise people wouldn't be locked away when they're not having any symptoms.'"

Get real-time updates as this story unfolds. To start, just "star" this story in ABC News' phone app. Download ABC News for iPhone here or ABC News for Android here. To be notified about our live weekend digital reports, tap here.