Obama says parts of climate deal must be legally binding 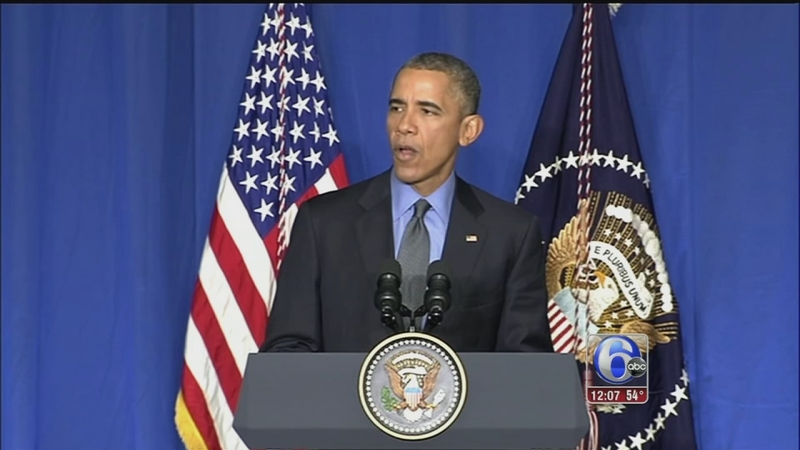 PARIS -- Parts of a global climate agreement being hammered out in Paris should be legally binding, President Barack Obama said Tuesday. His declaration was both a boost to climate negotiators seeking a tough accord and a challenge to Republican senators, many of whom don't believe that global warming is real.

Whether or not to make the climate accord legally binding is a major sticking-point at the two-week talks in Paris, which aim to get all countries to agree to cut emissions that scientists say are warming the Earth and increasing extreme weather such as droughts and floods.

Obama has spent months prodding other countries to make ambitious carbon-cutting pledges to the agreement, which would last long beyond the end of his presidency in early 2017.

In Paris, Obama said the specific targets each country is setting to reduce greenhouse gas emissions may not have the force of treaties, but it's critical that "periodic reviews" of those commitments be legally binding. He's referring to a mechanism sought by negotiators under which countries would ratchet up their commitments every five years.

"That's going to be critical in us having high ambitions and holding each other accountable," he said.

Obama would have little chance of getting the Republican-run Congress to approve a fully binding new climate treaty fighting global warming. So the White House has been searching for a compromise, sparing the need for a new vote.

The White House had already said parts of the deal should be legally binding, but this is the first time Obama has said it himself, and spelled out which ones.

Senate Majority Leader Mitch McConnell, R-Ky., and other Republican leaders have warned other countries not to trust any deal Obama may strike. Other Republican politicians are working to nullify Obama's emissions-cutting steps at home.

More than 190 countries are taking part in the Paris talks based on a collective understanding that humans are contributing to global warming and have some role to play in slowing it.

In the United States, however, there is debate about whether humans really are contributing to climate change, and what, if anything, policymakers should do about it. Almost all Republicans, along with some Democrats, oppose steps Obama has taken to curb emissions, arguing they will hurt the economy, shutter coal plants and eliminate jobs in power-producing states.

Other countries are also concerned about economic impact.

"So, although everyone here is unified in the desire to address climate change, economic interests play a role as well."

Negotiators in Paris still face the tricky task over the next two weeks of hammering out a legal structure for a partially binding deal.

Nigel Purvis, a former U.S. climate negotiator and president of the non-governmental organization Climate Advisers, said Tuesday that Obama has all the legislative authority he needs to enter such an agreement, thanks in part to a 1992 treaty signed by then-President George H.W. Bush and approved by the Senate. The president also has executive authority for what's likely to be required by a climate deal, he said.

The encounters highlighted another big debate in the effort to reach an accord: how much aid rich countries should give poor ones to help them adapt to climate change and reduce their emissions.

Obama met with envoys from island nations hit hard by rising seas and increasingly violent storms, which scientists attribute to climate change prompted by man-made carbon emissions. The Hawaiian-born Obama said he understands the beauty and fragility of island life and called their populations "among the most vulnerable to the ravages of climate change."

At the same time, African countries pointed out they need new ways of generating power to ensure everyone has access.

"When a young student is forced to go study under a street lamp at night, it clearly demonstrates the electricity issue," Malian President Ibrahim Boubacar Keita said.

Hollande said France would invest billions of euros in the coming years for renewable energy in Africa and to increase Africans' access to electricity.

"The world, and in particular the developed world, owes the African continent an environmental debt," he said.

The lake, surrounded by Chad, Cameroon, Niger and Nigeria, has shrunk as much as 90 percent since 1960, changing the lives of nearby farmers, fishermen and herders. Some also say the increasing desperation is driving people into the extremists' ranks.

The climate conference began Monday with an unprecedented gathering of world leaders outside Paris. Presidents, prime ministers and princes urged the delegates to build a better planet for future generations, hoping to avoid a repeat of the embarrassing failure of a similar effort in Copenhagen in 2009.

On Tuesday, the negotiations began in earnest, with the key task of figuring out who will pay for everything the leaders say needs to be done.

Developing countries say they need financial support and technology to relocate threatened populations and make their own transition to cleaner energy.

The talks, which run through Dec. 11, are aimed at a broader, tougher replacement to the 1997 Kyoto Protocol. That treaty required only rich countries to cut their emissions, while this time the goal is for everyone to pitch in.

After protesters clashed with police earlier this week, Paris police on Tuesday extended a ban on public demonstrations around the climate conference until it's over.