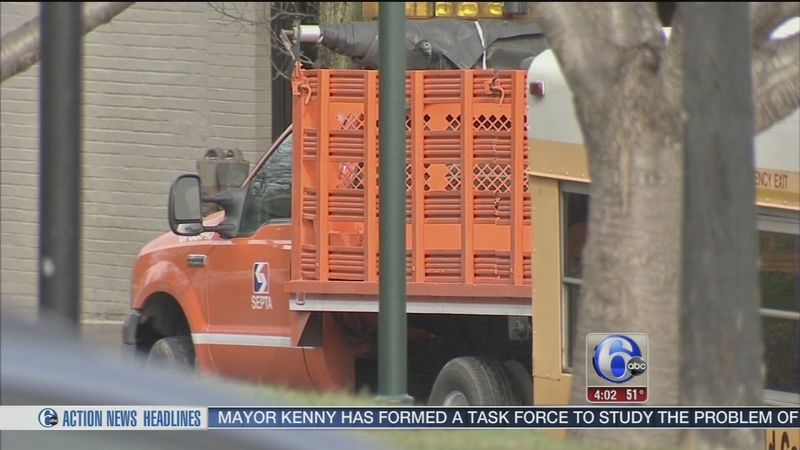 WEST PHILADELPHIA (WPVI) -- A man who was nearly the victim of a carjacking shot the suspect after he went on to carjack, and crash, a SEPTA vehicle on Wednesday morning in West Philadelphia.

It happened around 10:30 a.m. at the intersection of 63rd Street and Woodbine Avenue.

Police say the 32-year-old suspect was driving a Dodge Charger eastbound on Woodbine when he crashed into a vehicle going through the intersection.

That vehicle then hit other vehicles nearby.

Police say the suspect tried to drive away but unable to do so, so he got out of his vehicle and tried to carjack the driver of a white Ford Taurus.

The driver of the Taurus held the door closed so the suspect couldn't get in.

That's when, police say, the suspect spotted a slow-moving SEPTA vehicle and pulled the driver out.

The suspect tried to drive away but crashes the SEPTA vehicle into two parked cars, investigators say, so he got out of the vehicle and headed back to the crash scene.

Meanwhile, the driver of the Taurus, who is licensed to carry a gun, shouts "Stop this guy!"

Witnesses say there was a struggle between the driver, the suspect and other bystanders.

That Ford driver has a permit to carry a gun, police say, and was armed at the time.

The suspect tried to grab that gun, police say, but the Ford driver shot the suspect in the leg.

The would-be carjacker was taken to the hospital in an unknown condition.

The suspect is expected to be charged with multiple counts of aggravated assault and two counts of carjacking.

The name of the suspect has not been released.