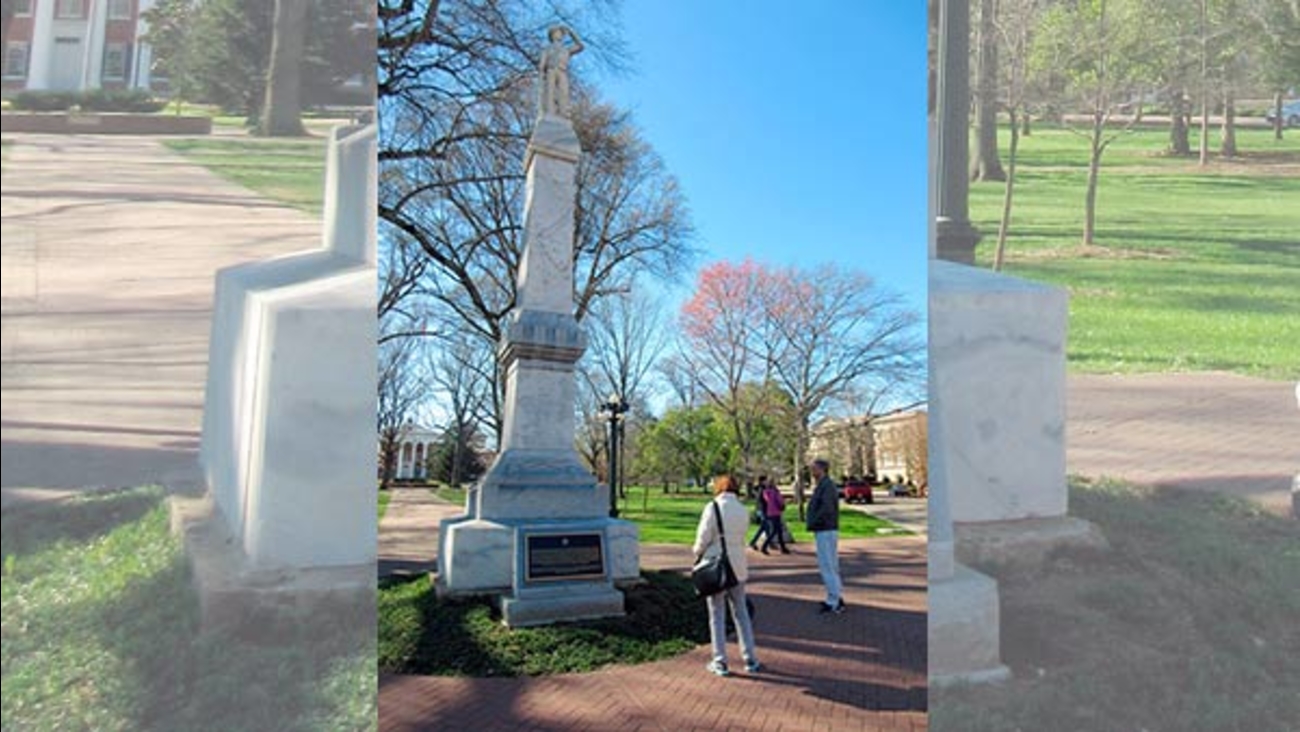 FILE- This March 12, 2017, file photo shows a statue of a Confederate soldier on the campus of the University of Mississippi in Oxford, Miss. (AP Photo/Beth J. Harpaz, File)

AP
By EMILY WAGSTER PETTUS
JACKSON, Miss. -- The University of Mississippi will post a sign acknowledging that slaves built some structures on the main campus founded before the Civil War.

The university made the announcement Thursday, also saying Ole Miss will strip the name of James K. Vardaman off a building. Vardaman, a white supremacist, was Mississippi's governor from 1904 to 1908 and a U.S. senator from 1913 to 1919.

The changes are part of an effort started in 2014 to provide historical context on the Oxford campus, which was rocked by violence after court-ordered integration in 1962. The administration has already added a plaque to provide information about slavery and the Civil War to a Confederate soldier statue near the Lyceum, the main administrative building on campus.

"As an educational institution, it is imperative we foster a learning environment and fulfill our mission by pursuing knowledge and understanding," Chancellor Jeffrey Vitter said in a news release.

The move to add historical context to some places and to rename others at Ole Miss comes amid debate in many parts of the U.S. about how to deal with the public display of symbols and monuments tied to slavery and the Confederacy. New Orleans is among the places that have recently removed Confederate monuments. Harvard University this year acknowledged its ties to colonial-era slavery, and Yale University rebranded a residential college that had been named for a 19th century U.S. vice president who supported slavery.

All eight of Mississippi's public universities have stopped flying the state flag because it includes the Confederate battle emblem - a red field topped by a blue tilted cross dotted by 13 white stars. Adopted in 1894 and reconfirmed by voters in 2001, it is the last state flag in the nation with the emblem that critics see as racist.

A sign will note that four projects on the Ole Miss campus were built with slave labor. One is a cut through some hills to make a route for railroad tracks. The other three are buildings - the white-columned Lyceum, completed in 1848, the same year the university opened; an astrological observatory that was finished in 1859 and now houses the Center for the Study of Southern Culture; and a Georgian-style brick building dating to 1853, now home to international studies.

A campus committee recommended adding historical context for some campus buildings or monuments, and removing Vardaman's name from a building that used to be a dormitory but is under renovation to house offices. A new name for Vardaman Hall has not been chosen.

The committee wrote that when he was a newspaper editor before taking office, Vardaman used racial slurs to denounce President Theodore Roosevelt for dining with black people.

"As governor of Mississippi, Vardaman used racial hatred and fear to shore up the white vote," the committee wrote, quoting a 1907 campaign speech in which he called for lynching black people to maintain white supremacy. "From the state's highest elected position, Vardaman also argued that education ruined black Mississippians and made the dismantling of African-American education in the state a priority."
----------
Send a breaking news alert
Report a correction or typo
Learn more about the 6abc apps
Related topics:
slaverycollegeu.s. & world
Copyright © 2020 by The Associated Press. All Rights Reserved.
More Videos
From CNN Newsource affiliates
TOP STORIES