Parents lift their spirits with celebration of life in Marcus Hook 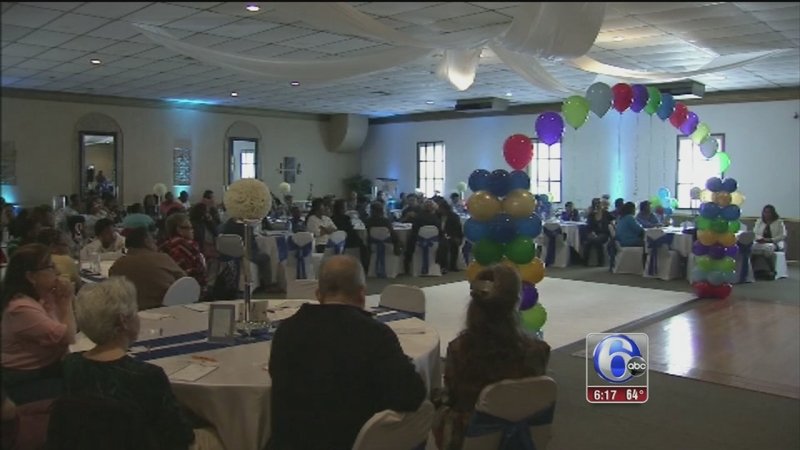 MARCUS HOOK, Pa. (WPVI) -- Big smiles and laughs filled the Market Street Ballroom Saturday in Marcus Hook. The night of comedy and fellowship was much needed for the parents whose children were killed in the City of Chester.

"It's unbelievable that we really forgot how to laugh and enjoy ourselves," said Women of Strength President Beverly Wright.

Wright helped to form the group called Women of Strength United for Change in 2007. Her son, Emein, was shot and killed in Chester in 2005.

"He was a happy-go-lucky guy, and I know he won't want me to be sad. So I pick it up," said Wright. "And now I'm raising his son so I really have to pick it up."

The group provides support for mothers in Chester with similar experiences.

The event gave parents the chance to celebrate the birthdays of those killed over dinner and a comedy show, including the parents of Charles Reynolds Jr.

"I'm excited about today. For a chance to laugh and remember him with people that knew him," said Diana Reynolds of North Wilmington.

"It's good to have this first celebration of his life. Thirty-one years that he's been here," said Charles Reynolds of North Wilmington. "He accomplished a lot in 31 years."

Almost 14 years after Franklin Carter Jr. was shot and killed, his mother says there's been no arrest. She says this group has been a Godsend.

"Getting around the women built me up and kept the Lord on my side," said Women of Strength Chaplain Charlene Carter. "I'm just so happy to be with this group. Wonderful group."