Rally for peace on steps of Wilmington shooting victim's home 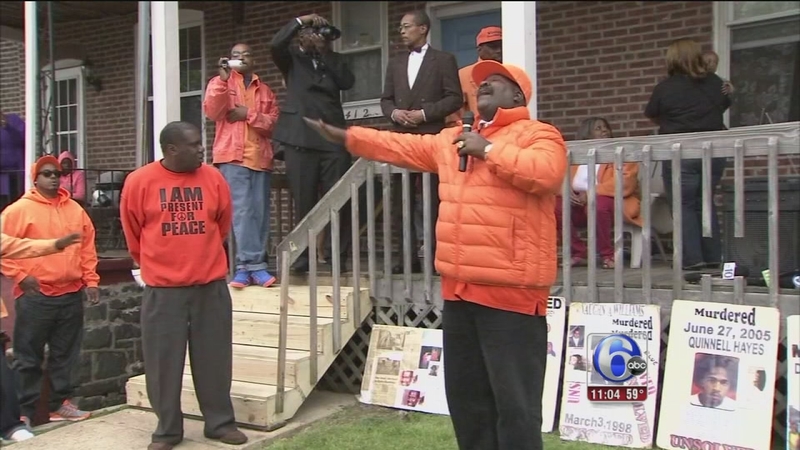 WILMINGTON, Del. (WPVI) -- An anti-violence activist in Wilmington was shot on her porch while holding her grandchild earlier this week and on Wednesday dozens rallied for peace.

The shooting happened around 5:30 p.m. Monday near 25th and Madison streets

On Wednesday, dozens of people rallied on the steps of Cheryl Allen's home.

Watch the report from Action News.

The 57-year-old grandmother is back on her porch, just a few feet away from where she was sitting with her grandson Monday when she was shot twice.

Police say two men opened fire on the block near Madison Street. Allen was struck in the chest and back.

However what many would call irony, Allen and her husband call a sign.

For five years, he's lead the Wilmington chapter of the Peacekeepers, a group that hits the streets weekly to do just that, keep the peace and speak out against violence.

"I was angry but because of the faith my wife and I have, I understood that you know what, I still have a job to do," said Matthew Allen, husband.

Neighbors and peacekeepers from across country showed their support.

Allen says as she and her husband combat violence, the violent act that almost took her life, only made her stronger.

"I guess they thought they were going to kill this body but God had another purpose for it and I thank him daily every day," she said.
The Peacekeepers will be back on the streets next Thursday.

Meanwhile police continue to search for suspects in the shooting. Anyone with information is urged to contact Wilmington Police at (302) 576-3990.
Related topics:
wilmingtonshooting
Copyright © 2021 WPVI-TV. All Rights Reserved.
More Videos
From CNN Newsource affiliates
TOP STORIES