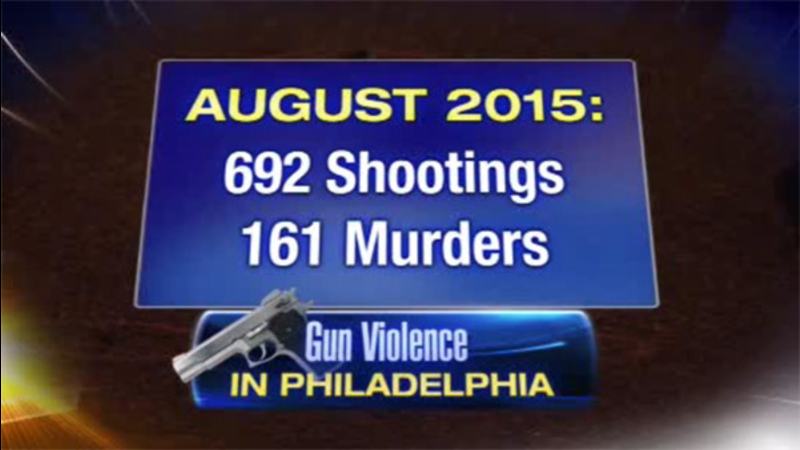 GRAYS FERRY (WPVI) -- If you feel like this year has been an especially violent one in the City of Brotherly Love, you're right.

The explosion of gunfire this summer has been stunning.

On recent nights in South Philadelphia's Point Breeze and Grays Ferry neighborhoods, dozens and dozens of shots have been fired, leaving many wounded and innocent bystanders terrified.

One resident, Sal, tells us, "You can hear 'em. You know? But the sad part about it is the innocent people that get caught in the crossfire. And they're making you scared to even come out your house. You know, I got a wife, I got two kids."

Philadelphia Police Commissioner Charles Ramsey says, "We've had a little uptick in some gang activity - particularly in South Philadelphia with some shootings and so forth. And we're looking into the people that are responsible for that."

Citywide the murder and violence rate is running significantly ahead of last year's. 692 people have been shot so far this year - 161 murdered.

Mayor Michael Nutter reacted by saying, "I'm absolutely concerned about this. Our trend over the past few years has been in a downward direction, and we still have a decent amount of this year to try to make up some ground."

Everett Gillison, Deputy Mayor for Public Safety, tells us, "This is something that's happening all over the country, and police agencies as well as social service agencies are now trying to work together to get an explanation as to why it's happening."

The city's leaders say they will not surrender to the culture of violence.

City Councilman Curtis Jones says, "I hate teddy bear memorials. I hate explaining to a parent why they prematurely lost their child - in particularly innocent victims who are just in the way."