WPVI
1 / 29
October 19, 2016: The Action Cam was in the 500 block of East Linden Avenue in Lindenwold, N.J. after a small plane went down behind a home.
LINDENWOLD, N.J. (WPVI) -- Police have identified the pilot and passenger who were injured in a plane crash in Camden County.

Authorities say 66-year-old Wayne Gilchrist of Marlton was flying the plane when it crashed in a Lindenwold neighborhood Wednesday afternoon.

72-year-old David Misek of Cherry Hill, New Jersey was the only passenger on board.

Chopper 6 over a plane crash in Camden County.

Both were taken to Cooper University Hospital, one by helicopter and the other by ambulance.

Police say Gilchrist suffered severe facial laceration upon impact which required a large number of stitches. He is currently listed in stable condition, but due to his injuries, investigators have been unable to obtain a statement from him.

Misek sustained a broken hip upon impact and is scheduled for surgery. He is currently listed in stable condition.

Miske was able to give a statement to investigators. He told them the plane experienced an unknown mechanical issue just prior to the crash.

Lindenwold police say the plane is expected to be removed from the crash site sometime Thursday.

The investigaiton into the plane crash crash continues.

The plane went down at approximately 12:47 p.m. Wednesday on the 500 block of East Linden Avenue.

"All of a sudden I hear 'Boom!', and it goes over my roof," Grizzoli said.

Officials say the plane, which the FAA identified as an Ercoupe 415-C aircraft, split in two upon impact, with the cockpit ending upside down.

The plane originated from the Flying W Airport in Medford.

Police say Gilchrist and Misek were trapped upside down for about 20 minutes in the mangled aircraft that landed in Doretha Williams' backyard.

"Thank God for the trees, that it was able to protect everything. What day do you come home and there's a plane actually in your yard?" Williams said.

A homeowner returned to find a plane in her backyard.

First responders from just across the street cut the men out of the plane.

"I saw one guy get pulled out. From what I saw it looked like he didn't look too bad. I thought it was going to be a lot worse than what it is," Shari O'Neil of Lindenwold said.

No one on the ground was injured and no homes were damaged.

The McCafferty family, which owns the plane, says it's registered in Maryland, where they live, but had rented it out to Gilchrist.

"Obviously something went wrong with this airplane. It's unknown right now what it was, but typically airplanes like this will suffer from engine failure, and that results in these off-airport landings," aviation expert Arthur Wolk said.

Wolk says the FAA will be looking at a number of factors including the plane's mechanics.
Related topics:
lindenwoldn.j. newsplane crash
Copyright © 2021 WPVI-TV. All Rights Reserved.
RELATED 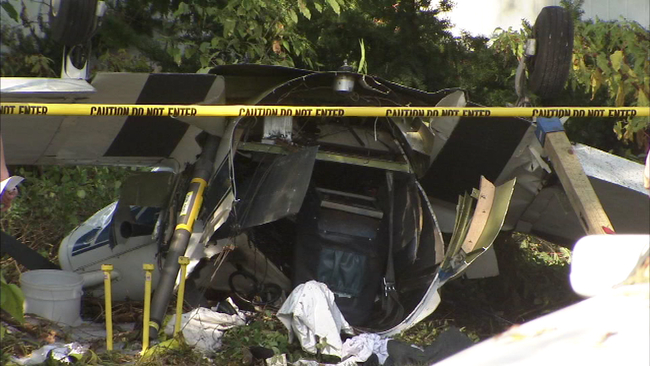