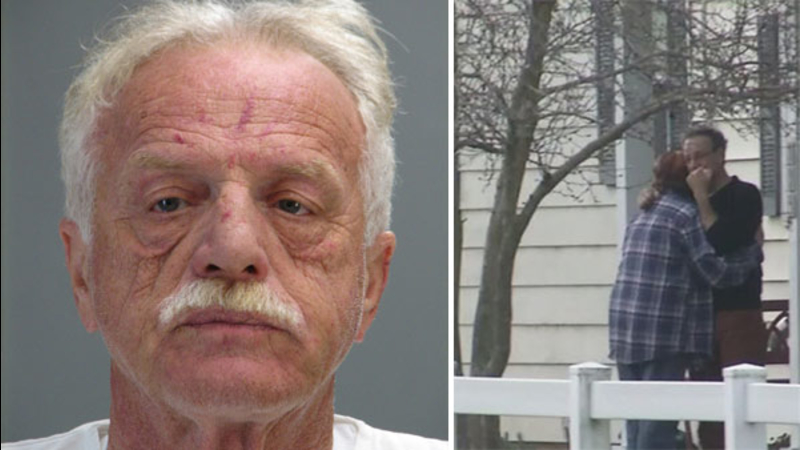 SMYRNA, Del. (WPVI) -- Delaware State Police have arrested a man in connection with the fatal stabbing of his estranged wife and her mother in Smyrna.

Sixty-six-year-old Gilbert E. Rochester of Clayton is charged with two counts of first-degree murder and two counts of possession of a deadly weapon during the commission of a felony.

Troopers responded to the residence for a report of a man stabbing a woman outside the home.

Action News was in Smyrna Sunday morning, after 2 women were stabbed to death.

A preliminary investigation revealed Rochester parked his silver Chevrolet Caprice about a mile from the residence, and then walked to the home where he waited outside.

Police said between 7:20 and 7:30 a.m., Rochester fatally stabbed Carrow as she exited the home on her way to church.

Shortly after, police said, Rochester fatally stabbed Lane in the driveway after she exited the home.

Two women are dead after a stabbing attack in Smyrna, Delaware.

Neighbors tell police they heard screams coming from the area of the home and, upon exiting their residence, witnessed the attack on Lane and called 911.

Rochester initially fled the scene, but was later taken into custody.

He was taken to an area hospital for treatment from the use of a Taser during police apprehension.

He is being held without bail at the James T. Vaughn Correctional Center in Smyrna.

Police said Rochester and Lane were in the process of a divorce, and she had been currently living at the residence with her mother and her 87-year-old step-father.