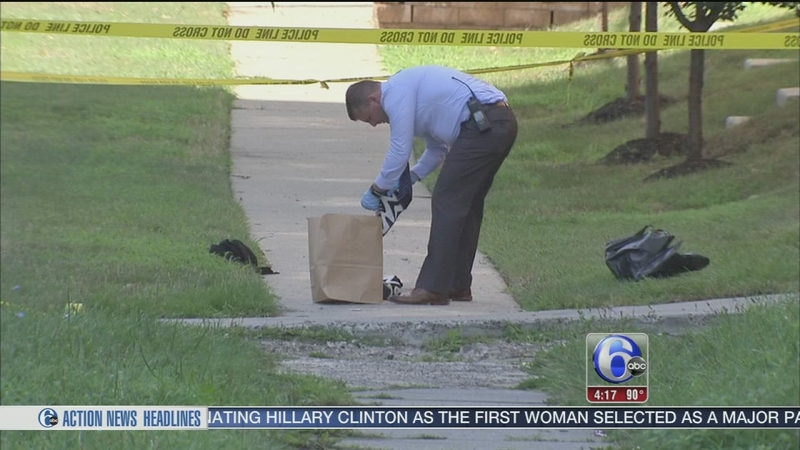 WYNNEFIELD (WPVI) -- Police say an alleged robber was shot and wounded by a victim in Philadelphia's Wynnefield section.

It happened around 5:15 a.m. Tuesday at the Gulf gas station on the 2200 block of Bryn Mawr Avenue.

According to police, the suspect tried to allegedly rob two people.

Action News spoke to the first man the suspect approached. He was able to get away, and called the police.

Soon after, he says he heard gunshots.

Jerome Eason had just left his maintenance job at the Gulf station.

When he got to his car, he realized he forgot his coffee inside, and quickly ran back in.

The man was sitting in his minivan when he returned.

"He was sitting in my backseat pointing a gun at me. He told me to get in. I'm not getting in. No way I'm getting in. So I ran back in and called the police," said Eason.

From there, witnesses saw the suspect take off down Bryn Mawr Avenue toward Gainor.

Rabito Ahiatr, a neighbor said, "That was when I saw the guy run, and then I heard the gunshots."

But it was not the suspect who fired. Police say he had come across another man and attempted to rob him.

Turns out, the intended victim had a license to carry and pulled out his own gun.

Philadelphia police Captain Drew Techner said, "This male pulled out his own weapon and fired what we believe to be three shots."

The suspect was hit multiple times and taken to the hospital in critical condition.

While he was in surgery, detectives were out on the scene collecting evidence.

Ward Chairman Steve Jones wants to send the message that the violence needs to stop.

He said, "If there's something that you need, there are programs out here. You can go out and look for programs. Stop trying to get lucky. Because sometimes you get unlucky."

At this point police believe the shooting was justified. They say the man who fired his weapon remained on the scene for officers and is cooperating with police.
Related topics:
west philadelphiaphilly newsattempted robberyshooting
Copyright © 2021 WPVI-TV. All Rights Reserved.
More Videos
From CNN Newsource affiliates
TOP STORIES