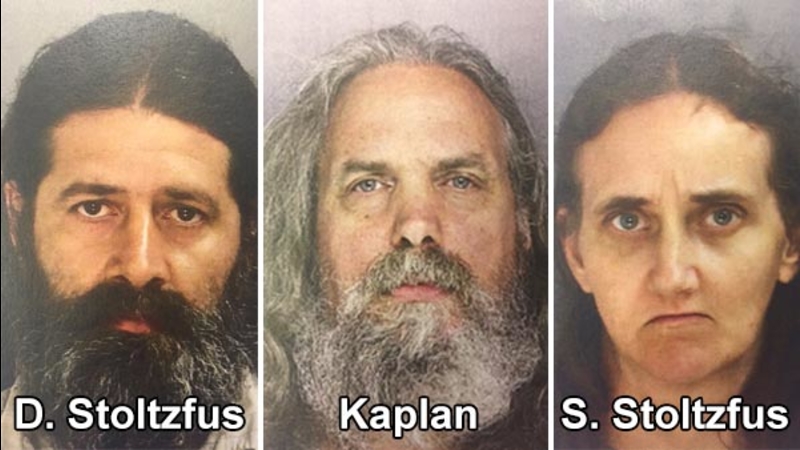 FEASTERVILLE, Pa. (WPVI) -- Investigators remained at the Bucks County home of a man facing sex assault charges after allegedly fathering two children with a teenage girl who, police say, was "gifted" to him by her parents.

Vehicle after vehicle arrived to help with the investigation, and search dogs went through the property looking for evidence.

Neighbors watched it all, in apparent disbelief.

"If I saw anything suspicious, I would've called somebody. Kids are a molding zone. You can't hurt them. They're so innocent," said Kris Deering of Feasterville.

Chopper 6 flew over the property as investigators worked. From the air they could be seen marking a grid with small flags in an area of the backyard away from the house.

Police issued a search warrant Saturday for the Bucks County home of a man facing sex assault charges after allegedly fathering two children with a teenage girl who, police say, was "gifted" to him by her parents.

Investigators dug small holes in that area. Two vehicles were also seized - a blue van and a white car.

"Basically what we're doing now is search warrant to collect evidence and process the crime scene," said Lower Southampton Police Lt. John Krimmel. "We were waiting for daylight so we could get better photography done. That's why we didn't do it last night."

Bucks County District Attorney David Heckler left the scene without making any comments on camera, refusing to answer questions about what was found on the property or about why the situation wasn't discovered earlier when neighbors tell us they called police multiple times in the past.

During a press conference, Robert Hoopes, Lower Southampton Director for Public Safety, said investigators meticulously went through each room of the house Saturday, and would likely be there Sunday as well.

"They were living down in the basement, they were hiding in the chicken coop," said Hoopes. "They're Amish, and they have a different way of life I would guess."

He says investigators also found instruments, homework in the basement and believe the girls slept on air mattresses and were home schooled there.

Cadaver dogs were going through the property Saturday. Hoopes said to his knowledge, they have not found any bodies.

Action News spoke exclusively with the woman who says she contacted authorities after seeing multiple young girls living in the home - all wearing blue dresses - all looking unhappy and fearful.

He says they did receive calls about the home, but they were not for child abuse, and they did not have enough evidence to go into the home.

"What kind of calls did they call? That they saw Amish people? That's the calls that we got," said Hoopes. "We didn't get child abuse calls there. If it was a child abuse call, we would have responded."

Police say Daniel and Savilla Stoltzfus are claiming the remaining girls in the home as their children, but they are working to confirm that since they have no social security cards or birth certificates.

"We haven't had the opportunity to talk to the children in detail yet. And I'm sure when they do, they'll find some clues. We want to address were they abused? Weren't they abused?" said Hoopes.

The children are in the custody of Bucks County Children and Youth.

"We're going to be interviewing these kids over the next couple of days. We didn't really talk to them a whole lot. We have a process that we use - respect their culture, respect the age of these kids," said Krimmel. "We want to make sure their well-being is taken care of."

Twelve girls, ranging from 6 months to 18 years, were found Thursday inside the home located on the 400 block of Old Street Road in Feasterville, Pennsylvania.

It all started when Southampton police received a complaint about the health and safety of the numerous children living in the home.

Action News spoke with the woman who says she contacted authorities after seeing multiple young girls living in the home - all wearing blue dresses - all looking unhappy and fearful.

She tells us a neighbor saw the man bring home a baby girl around six months ago. When she heard no report had been made, she made an official complaint.

Police had also been told that Kaplan was telling neighbors that no children lived there.

According to the police affidavit, Kaplan told officers an 18-year-old was the mother of a 3-year-old child and a 6-month-old child.

"While interviewing some of these children, we learned that an 18-year-old had a 3-year-old child and a 6-month-old child with an adult male living in the house, Lee Kaplan," said Krimmel.

Kaplan allegedly told police the 3-year-old was born after he had sex with the teen when she was 14 years old.

According to investigators, the 18-year-old was "gifted" to Kaplan by her parents in thanks for helping the family out of financial ruin and keeping them from losing their farm.

Officials say the teen's father, 43-year-old Daniel Stoltzfus, told investigators he and his wife, 42-year-old Savilla Stoltzfus, did it after "researching the legality of it on the Internet."

Stoltzfus said he knew his daughter was 14 when she first became pregnant, police say.

The couple sent nine of their other children to live with Kaplan after they lost their farm anyway. At this time, authorities have no evidence that any of the other nine girls had been sexually assaulted.

For three years now, the Stoltzfuses have been living in a rented farmhouse in rural Quarryville, Lancaster County.

Some of their neighbors from nearly a mile down the road tell us they were shocked to hear the allegations being made against them.

"I didn't think something like that would happen around here," said Tracey Winger of Quarryville. "This has always been a quiet area."

Action News has obtained court documents that showed the couple had a bitter falling out in 2003 with the Amish church that ended up with their home being seized for Sheriff's sale and Daniel Stoltzfus' steel fabrication business going under.

Stoltzfus blamed the church for his economic woes, including the mortgage foreclosure on the home. They declared themselves born again Christians.

Action News spoke briefly with their 19-year-son, John, at the house Friday night. He says his folks are "good parents."

Another Quarryville neighbor told us the allegations against Daniel Stoltzfus and his wife does not really surprise him.

"He's asking, 'Why you there?' and he don't have much time to talk and he's not comfortable having people around," said Ed Martin of Quarryville, adding he found Daniel Stoltzfus a bit peculiar.

The Stoltfzuses, from Quarryville, Lancaster County, are charged with conspiracy for statutory assault, endangering the welfare of children and related offenses.

All three are being held on $1 million bail each at the Bucks County Jail.

Betz tells Action News she feels like a weight has been lifted, and hopes the girls receive the therapy they need.