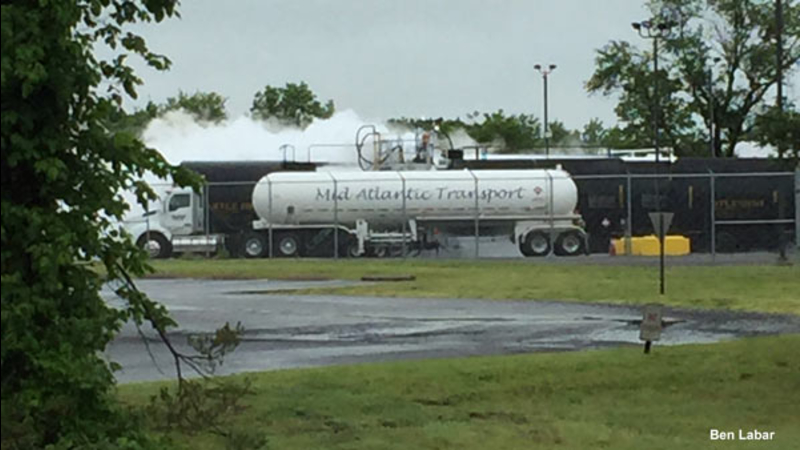 "Everything looks like it is in pretty decent shape right now," Logan Township Administrator Lyman Barnes said in a Thursday afternoon press conference.

Officials were called around 9:50 a.m. Thursday Center Square Road in Logan Township for the report of the leak.

Valve sealed after leak in Gloucester County. Gray Hall reports during Action News at 4 p.m. on May 25, 2017.

Barnes says while there was no significant health threat to residents, the primary issue was propylene being a fire hazard.

Atlantic City Electric shut down power to the area as a precaution.

Evacuations were issued for a half-mile radius around the site, sending 1,900 people out of their businesses. There were no residential evacuations.

The 30,000 gallon SMS Rail Line car was parked and offloading material into trucks when it began leaking propylene from a valve, Barnes said.

After a few hours, crews were able to secure the valve. As a precautionary measure, Barnes says a new pipe will be connected with another valve in series with the existing valve as a secondary source of containment in case of another failure.

Two workers were injured in the incident. One worker refused treatment, the other was transported to the hospital and is expected to be OK.

Barnes says crews are monitoring the air quality of the neighborhood and are going to door to door to make sure.

Though the leak has been contained, the evacuation order remains.

By 6 p.m. the Logan Township Police Department said those evacuated were able to access the parking lots of the businesses to retrieve their vehicles, but still should not enter the evacuated buildings.

The incident caused the temporary closure of nearby roads and the I-295 ramp to Exit 10.